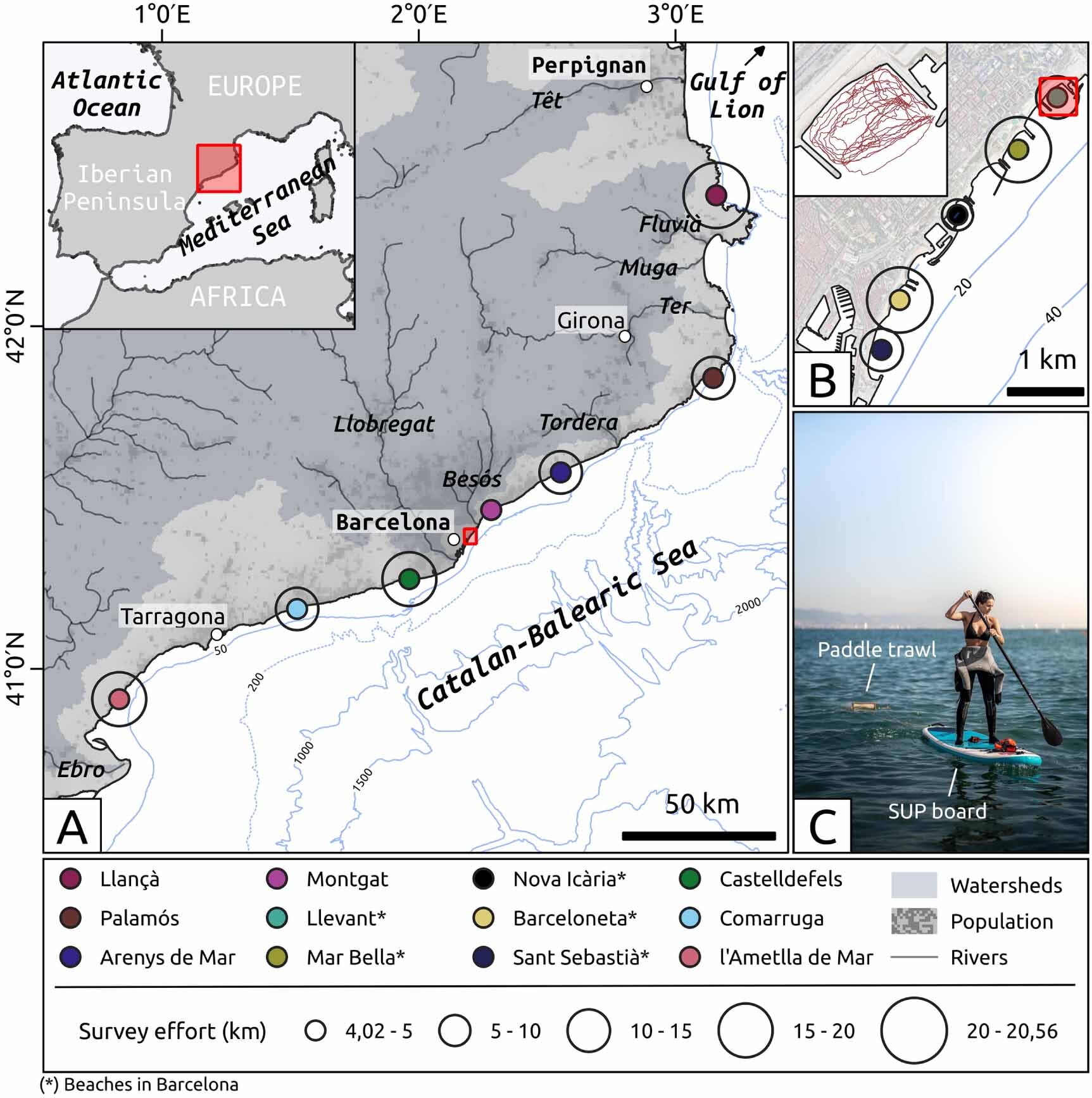 The presence of microplastics in the oceans is widely documented / reported by oceanographic research, but data on pollution in coastal regions are scarce due to access difficulties faced by science boats. Researchers from the Consolidated Research Group on Marine Geosciences at the Faculty of Earth Sciences of UB, in collaboration with the Spanish delegation of the NGO Surfrider Foundation Europe, studied the amount and characteristics of floating plastics on the Catalan coast, thanks to a civic science initiative 25,000 microplastics with special nets pulled by rowing boats. The results are published in the open access journal Letters for environmental researchreveal that coastal areas contain a huge amount of plastic debris, the presence of which is under great spatial and temporal variability.

“The average concentrations of microplastics we found near the coast are above those previously found outside bathing areas. We found higher maximum concentrations – more than six plastics per square meter – and more frequent over time. In addition, there are some areas and times of the year in which they exceed by an order of magnitude the average values ​​found in the open Mediterranean and around the world, “said UB lecturer and researcher Anna Sanchez-Vidal.

“Civil science is a useful and powerful tool for studying marine pollution, while enabling citizens with scientific knowledge,” said Sanchez-Vidal.

These large amounts of microplastics show, according to the authors, that “there must be processes that tend to concentrate or keep plastics close to shore.” The study presents some explanations, such as variations in meteorological and oceanographic conditions, the greater impact of river flows during periods of heavy rains and the proximity to heavily populated urban areas with high seasonal tourist flows and the concentrating effect of areas bounded by breakwaters or ports. .

Beaches such as Mar Bella or Sant Sebastià in Barcelona are more sheltered from the wind and waves due to these structures and can retain and accumulate more microplastics than other areas that are more exposed, which shows longer stay, ”says William P. de Haan, a UB researcher and first author of the article. In this sense, the areas where researchers are finding more microplastics are the beaches of Sant Sebastia, New Icaria and the Levant, all three in the Catalan capital. In addition, the researchers identified potential seasonality. “We noticed that areas like Llançà or Castelldefels showed a lower trend in January and February, probably due to the influence of surface currents and winds that reduce floating microplastics, and a higher trend just before and after the summer months,” said the researcher. .

Finding the origins of microplastics to create better solutions

The study not only determined the abundance of microplastics, but also provided a detailed description of the size, color, shape and composition that can help determine the sources of microplastics, which is essential to provide solutions to the growing presence of plastics in marine water. environment. The results show that foam and filaments from food packaging and fishing account for nearly 11% of the plastics collected. However, most of the plastics were identified as fragments, films and sheets, which probably stemmed from the disintegration of larger plastic pieces. “We can identify polyethylene films and sheets originating from bag shredding; fragments of polyethylene and polypropylene, from the crushing of bottles or packaging; fragments of expanded polystyrene used in food packaging; threads from fishing gear, fragments of artificial grass, etc., ”says Anna Sanchez-Vidal.

This information, ranging from the physical characteristics of the microplastics to the concentrations of each in the sample areas, is available at website with several visualization tools to make these discoveries easy for the public to access.

From Llançà to l’Ametlla de Mar

In the study, researchers used samples that volunteers from eight Catalan organizations collected over seven months. From Llançà to l’Ametlla de Mar, these volunteers were coordinated by the Surfrider Foundation Europe. “There has been a lot of participation and this proves that civil science is a tool with great potential for monitoring and researching the impact of plastics on the marine environment,” said Maria Balesteros, head of volunteering at Surfrider Spain.

These volunteers went to the beach every week or every two weeks for an hour with surfboards, kayaks and other rowing boats. They attached a net designed by researchers to collect floating microplastics over 0.3 millimeters in size. The path and coordinates of these transects were recorded on a mobile device and in the Wikiloc application to record latitude, time and trawl distance. The collected plastics were then sent to the laboratory of the University of Barcelona for analysis by trained staff. “We were surprised by the amount of high-quality and scientifically significant data we received in such a short time and at a lower budget than other similar research projects,” said Anna Sanchez-Vidal.

“Projects involving research centers and society are key to continuing to seek solutions to the problems of plastics in the oceans,” said Maria Balesteros.

Research on the Catalan and Basque coasts

The next step in this project is to analyze whether the trends in this study persist over time, the specific factors that lead to the variations found, and the evolution in microplastic concentrations in the short and long term.

To this end, the civil science project will continue in the coming months. It will also extend the sampling areas to the Basque coast. “This will allow us to better understand the dispersal mechanisms and characteristics of microplastics in the semi-enclosed sea in the western Mediterranean and in a relatively sparsely populated area, but with high fishing activity in the Atlantic Ocean,” concludes Anna Sanchez-Vidal.

Provided by the University of Barcelona

Quote: A civil scientific study finds a huge amount of microplastics in the Catalan bathing areas (2022, May 9), extracted on May 9, 2022 from

Meet the 10 fintech startups selected for the Venture Leaders 2022...

user - October 21, 2022 0
Applications
Venturelab has selected 10 Swiss fintech startups for the fifth edition of the Venture Leaders Fintech program, organized in partnership with Swissnex and supported...

Burning India is turning to overheating coal for cooling

Can we make graphite from coal? Researchers are starting to...