Newstechok.com
Home Science Air conditioning must be a human right in the climate crisis 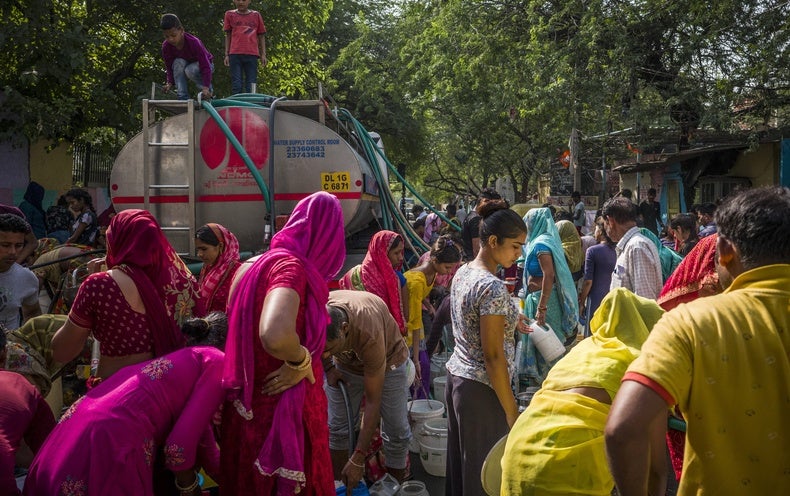 A record heat wave is sweeping South Asia, threatening hundreds of millions of people with deadly temperatures well above 100 degrees Fahrenheit. As the world heats up, billions of people need air conditioners. This 120-year-old technology was considered a luxury, but in the age of climate change it is a necessity for human survival. Understandably, this has raised concerns about the threat to the climate from overloading the world with AC. But the impending climate boom is a significant change in reducing the huge gap in the availability of refrigeration that exists between rich and poor people and nations – and in creating a fairer world.

From two billion AC units currently used worldwide, most of them are highly concentrated in rich countries in North America and East Asia (with Europe, which usually has a milder climate, in a distant third). In the world’s hottest regions, AC ownership is only 12 percent, compared to more than 90 percent in the United States and Japan. But as the population grows richer and temperatures continue to rise, this trend will change dramatically.

According to the International Energy Agency (IEA), the world is expected to add another four billion AC units by 2050, largely driven by demand in emerging economies such as India and Indonesia. Air conditioners can be quite energy-intensive, especially if inefficient models are used, which means that these countries will need much more electricity. In fact, AC could represent 20 to 44 percent of the peak load on India’s energy grid by 2050. If this power is supplied by fossil fuels – and in the highest growth areas, including India and Indonesia, it is usually – the increase will have a significant impact on global greenhouse gas emissions.

These predictions are scary. Could the need for cooling lead the planet to cooking? In fact, this is the wrong question. Disposing of AC is not an option and should not be the goal. Instead of a threat, this should be seen as an opportunity to explore greener cooling technology and promote the adoption of renewable energy. Meanwhile, air conditioning has the potential to level the playing field between different countries as an essential part of climate justice. In the temperate climate of the northern United States and northern Europe, the lack of cooling is usually a summer inconvenience. In the tropics, heat waves last longer, reach higher temperatures and are much more deadly. Last year, residents of Niamey, the capital of Niger, located on the edge of the Sahara Desert, suffered from 100-degree heat for 174 days. In Basra, Iraq, the number of days of 100 degrees F is 168; in Mumbai the number was 62.

To understand what such heat waves mean to humans physiologically, researchers use the “wet bulb temperature”, which combines heat and humidity, to measure how the human body experiences extreme heat. At the temperature of a wet bulb thermometer from about 90 degrees F, childbirth becomes dangerous, and if it climbs above 95 degrees F, the body can no longer cool down, leading to illness and even death. If global temperatures rise by 2 degrees Celsius (about 3.5 degrees F), as some forecasts suggest, South Asia may experience more than twice as much more dangerous to work and life-threatening temperatures than today. Limiting the temperature rise to 1.5 degrees C (about 2.5 degrees F) will halve that exposure, but millions in the region will still be vulnerable to extreme heat stress. This is not a hypothetical future problem. The past nine years all were among the top 10 warmest in history. This year the heat waves came earlier than ever for South Asia, setting a record for March. Heat waves in India have caused the deaths of at least 6500 people since 2010. In 2015 alone, about 3,500 people died in India and Pakistan during the fifth deadliest heat wave ever recorded.

Although the death rate jumped to the sky during heat waves, there are other harmful effects that need to be considered. High temperatures have been shown to impair productivity, causing significant damage economic losses in South and Southeast Asia, sub-Saharan Africa and Central America. It is expected in 2020 295 billion potential working hours were lost worldwide as a result of extreme heat, with the greatest impact on the agricultural sector of poor countries. The resulting loss of income can be devastating for workers.

How can the world prevent this disaster? First, assuming that adequate cooling is an urgent human need for a warming climate. The disturbances caused by extreme heat will continue to grow and access to fair cooling technology will be needed to ensure the survival and economic prosperity of the billions of people living in the tropics. In fact, longtime Singaporean Prime Minister Lee Kuan Yew considered air conditioning the most important invention for the development of his country.

Manufacturers and governments also need to innovate to develop affordable and efficient AC technology that uses lower-climate refrigerants. According to the IEA, today’s average AC units are only 10 percent more efficient than those sold in 2010, but effective policy and technology can double the effectiveness of AC modules and reduction of demand for cooling energy by 45 percent by 2050. In order to increase efficiency, the practice of disposing of older – and therefore less efficient and more environmentally harmful – models in poor countries must be limited. In addition to setting efficiency standards, governments (along with charities and manufacturers) need to invest in reducing the cost of better quality air conditioners. Switch to alternative refrigerants it can also significantly reduce refrigeration emissions in the coming decades.

Now is the time to build cleaner and more equivalent energy systems. For example, the demand for cooling is shifting to tropical regions, which are ideal for solar energy production, and daily temperatures correlate closely with solar peaks. This means that AC units can be an important driver of demand at times when solar production is at its peak. As a result, more solar energy will actually be used during peak hours, increasing the financial viability of the renewable energy sector worldwide. The introduction of air conditioners also needs to be complemented by wider efforts to reduce overall cooling energy consumption. This means improving the efficiency of the building and researching non-electric cooling technologies where applicable.

Cooling does not have to blow up the carbon budget. In fact, if used properly, it can be an engine of justice, economic growth and the transition to clean energy.

Matt McGlynn of Roswell Pro for maintaining the company’s identity

user - September 22, 2022 0
Accessories
The microphone industry isn't exactly bursting with ordinary, outsider DIY success stories - but Matt McGlynn is one of them. As founder and...

NASA is awarding contracts for next-generation space suits to hire

How can OCR help with RPA and document processing? —...