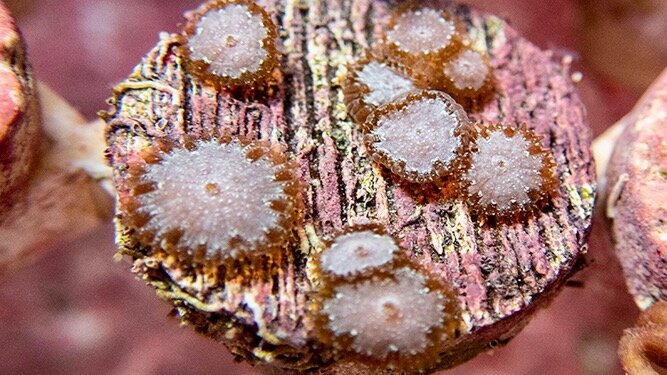 Baby corals are just as susceptible as adults to a deadly disease that has been spreading along the reefs of Florida since 2014, according to a new study led by scientists from the University of Miami (UM) Rosenstiel School of Marine and Atmospheric Science. The findings show that stony coral tissue loss disease (SCTLD) infects baby corals with similar severity and mortality that we see in adult colonies. This is the first study to show the impact of any coral disease on baby corals.

“Because baby corals have not been included in studies of Florida’s reef disease, we may have underestimated the mortality rate caused by the disease,” said lead author Olivia (Liv) Williamson, Ph.D. Candidate in the Department of Marine Biology and Ecology at UM Rosenstiel School. “It’s like trying to understand how COVID-19 is spreading among the population by studying only adults, without looking at whether and how the disease affects children.

During the first exposure, approximately 60 percent of coral marrow babies lost all tissue and died within two to eight days of developing lesions. In contrast, 38 percent of exposed coral brain infants showed active disease lesions during the same period, and only one death occurred.

They also found that older babies and babies grouped together were significantly less likely to get sick and die than smaller and lonely babies.

“There is a glimmer of hope that size matters and there is safety in numbers,” Williamson said. “Since some of them avoid infection at all, this suggests that some corals have some resistance – or at least relatively less susceptibility – to disease.

After 20 days, the researchers conducted a second exposure to further tests for the resilience of the remaining coral babies, and they all died within six days.

The study is an important warning to coral recovery practitioners about the risk of SCTLD in the baby corals they grow and transplant, but also suggests that this risk can be reduced by growing larger corals and encouraging pre-planting clustering.

Young corals are equally or more susceptible to SCTLD than adult colonies, suggesting that the mortality rate caused by SCTLD reefs is underestimated due to the lack of data on gathering corals.

The research team plans to conduct additional laboratory experiments to study the sources of resistance in order to support the breeding and rearing of baby corals that will not be easily susceptible to this disease.

Since first appearing in Miami waters in 2014, rocky coral tissue loss disease has now spread to all coral reefs in Florida, as well as the wider Caribbean Sea, affecting more than 20 species of coral and killing millions of coral colonies. The deadly disease causes white lesions and rapid tissue loss of reef-forming corals, the cause of which has not yet been identified.

The study appears in Limits in marine scienceand the authors are Olivia Williamson, Carly Denison and Andrew Baker of UM’s Rosenstiel School and Carrie O’Neill of the Florida Aquarium.

Sediment, a possible culprit for the spread of a deadly disease on coral reefs in Florida, the study found

Provided by the University of Miami

The Pride Cannon was repainted after being vandalized

A rocket laboratory to provide solar power for the space force

A neck patch for athletes can help detect concussions early