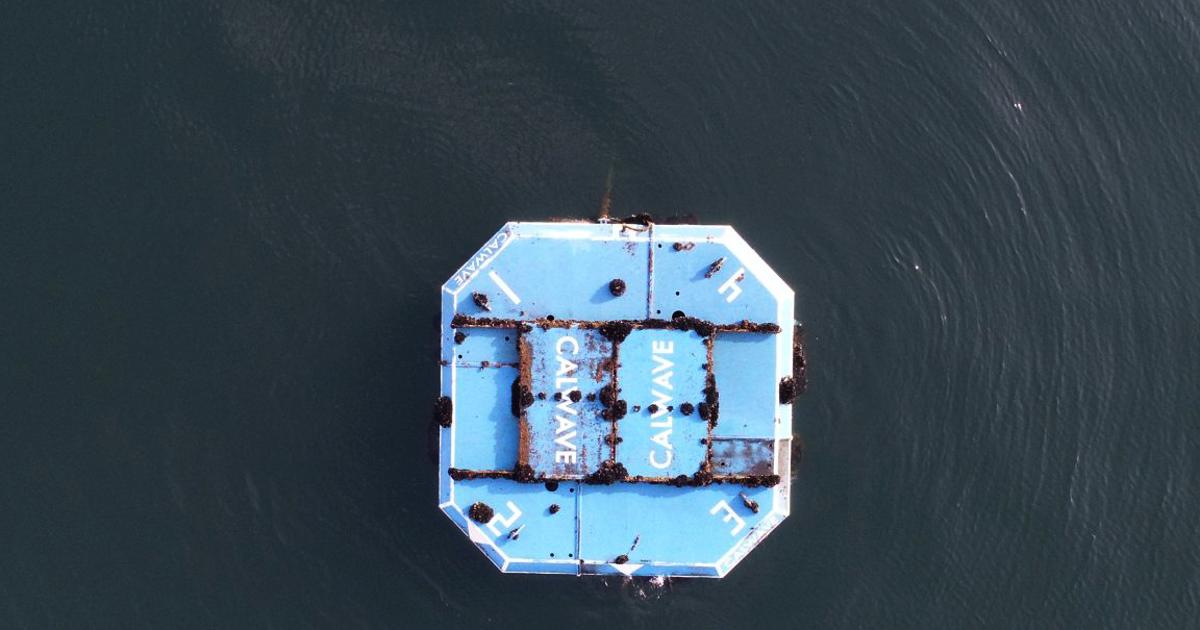 CalWave has been working on its xWave clean energy technology for many years now and announced the successful completion of an extended open ocean test off the coast of San Diego in which the device demonstrated over 99% system uptime.

Wave energy is one of the rarer renewable energy sources, and although there are many wave energy projects in development, the industry itself can be considered more or less embryonic at this stage. There is some promise in it; as CalWave points out, “ocean waves are 20-60 times more dense, predictable and consistent than other forms of renewable energy.”

On the other hand, extracting this energy turns out to be difficult. The ocean is a notoriously harsh environment for man-made facilities, and energy assets must pay back their significant capital costs over decades of continuous operation to attract investment dollars. Most projects seem to remain in the testing phase for an awfully long time, and nothing so far has been able to go commercial on a large scale.

CalWave is probably a good example; this company announces the successful completion of tests at least from back in 2016, when there was a 1/20 scale miniature model running in a test pool. The xWave is a solid, floating small rig that is towed offshore and anchored to the seabed, with a length of webbing that keeps it completely underwater.

The company has been curiously vague in its announcements about how its xWave device actually works. Indeed, here is the clearest statement we can find. “When a wave goes over the top, you get a pressure wave that causes motion relative to the seabed, and with our seabed anchors, we convert that relative motion into power,” COO Dan Petkovic said in a 2021 video. From this and some CAD illustrations in the same video, we assume that the xWave has four pulleys connecting cables to the seabed, and generates power as those pulleys wind and unwind as the platform is pushed around by the waves.

Dropping it underwater, the company says, protects the xWave from catastrophic damage when the ocean is in a bad mood. These reels can also be automatically and individually braked to varying degrees when the unit is hit by unusually large waves to buffer the more extreme forces so that it can either shut down completely or be retrofitted to harvests energy from weather that would put other renewables out of commission. CalWave says the device’s sustainability is key to its market advantage, and that it should ultimately be a much lower-cost device than others in the space.

The final open ocean test was planned for 6 months, but was extended to 10 months. CalWave says the x1 platform “achieved high performance as targeted and intended,” that it operated under fully autonomous control for about 80 percent of its operating time, that it demonstrated more than 99 percent uptime with zero operator intervention, and it properly shut down during particularly rough conditions with waves up to 15 feet high.

Anti-corrosion coatings and sacrificial anodes helped prevent rust, and the company also trialled an anti-biofouling coating, noting that uncovered areas experienced some biofouling, but this did not involve moving parts and had no impact on operations. A third-party assessment has confirmed that it is not a hazard to marine life.

So how excited should we be? I’m not sure, honestly. For starters, we don’t know how much power this thing produces. We know the company’s next move will be to deploy a 100-kilowatt version of xWave to be tested off the coast of Oregon for two years at PacWave South, “the nation’s first accredited, grid-connected, pre-permitted wave energy test facility.” The company’s “useful scale” designs are called the x100 and x800.

To be fair, anything operating at the kilowatt scale might be of interest to islanders and small coastal communities, but those kinds of numbers aren’t really relevant to national power grids looking to scale up and decarbonize energy production. Indeed, CalWave’s stated goal of deploying 1 GW of commercial marine energy technology by 2035 is depressingly modest; after 13 long years, the company hopes to deploy a capacity around that of an average nuclear power plant.

Assuming the x800 is an 800 kW unit, that suggests CalWave would need to make 1,250 unit sales to make this happen. Still, who knows? It will all come down to levelized cost of energy (LCoE); if this equipment can sit there and produce electricity for decades, require little in the way of maintenance and deliver power back to shore at a fraction of the cost of other offshore generation technologies, it will sell. If it can’t, it won’t.

The closest we can find to a designed LCoE for this device is 2018 rating of the best wave energy converters tested in 1/20 scale as part of the Wave Energy Prize competition. A team of researchers split between Sandia National Laboratory and the National Renewable Energy Laboratory came up with their own “ACE” metric to assess the cost of energy from small, early prototypes, and on that metric CalWave’s device ranks relatively well against others rated wave energy devices sitting somewhere around a third overall. On the other hand, from what we can tell, this prototype generates power using a different mechanism than current prototypes.

Obviously, the predictions are just educated guesses, but since LCoE is critical to the success of these technologies, it’s something that investors – and tech fans in general – should demand some numbers for.

One final thought: CalWave says its most recent 10-month test period exposed the xWave generator to two storms “representative of the largest storms over a 10-year period for a utility-scale system.” And really, how many times in the past few years have you heard about “once in a century” weather events?

These early days of climate change seem to have brought with them a rapid increase in the frequency of severe weather eventsand it seems reasonable to expect that we will see more and more in the coming decades. Hopefully, CalWave and many other planned renewable energy projects factor unprecedented extreme weather into their designs.

Check out a short video below.

Everything you need to know about Dall-E Mini, the whimsical AI Art Creator

Two inhaled covid vaccines have been approved. Here’s what you need to know.

Survey: Canadian telecommuters willing to walk if forced to return to...

user - October 12, 2022 0
IT
With more and more talk of returning to the office, it seems that remote workers have very clear opinions about it. In fact,...

These six foods may become more popular as the planet warms

Quantum computers may not offer extreme acceleration of chemistry

How does content moderation help businesses? How and where can...