Newstechok.com
Home IT Lenovo Glasses T1 hands-on review: a monitor on your face 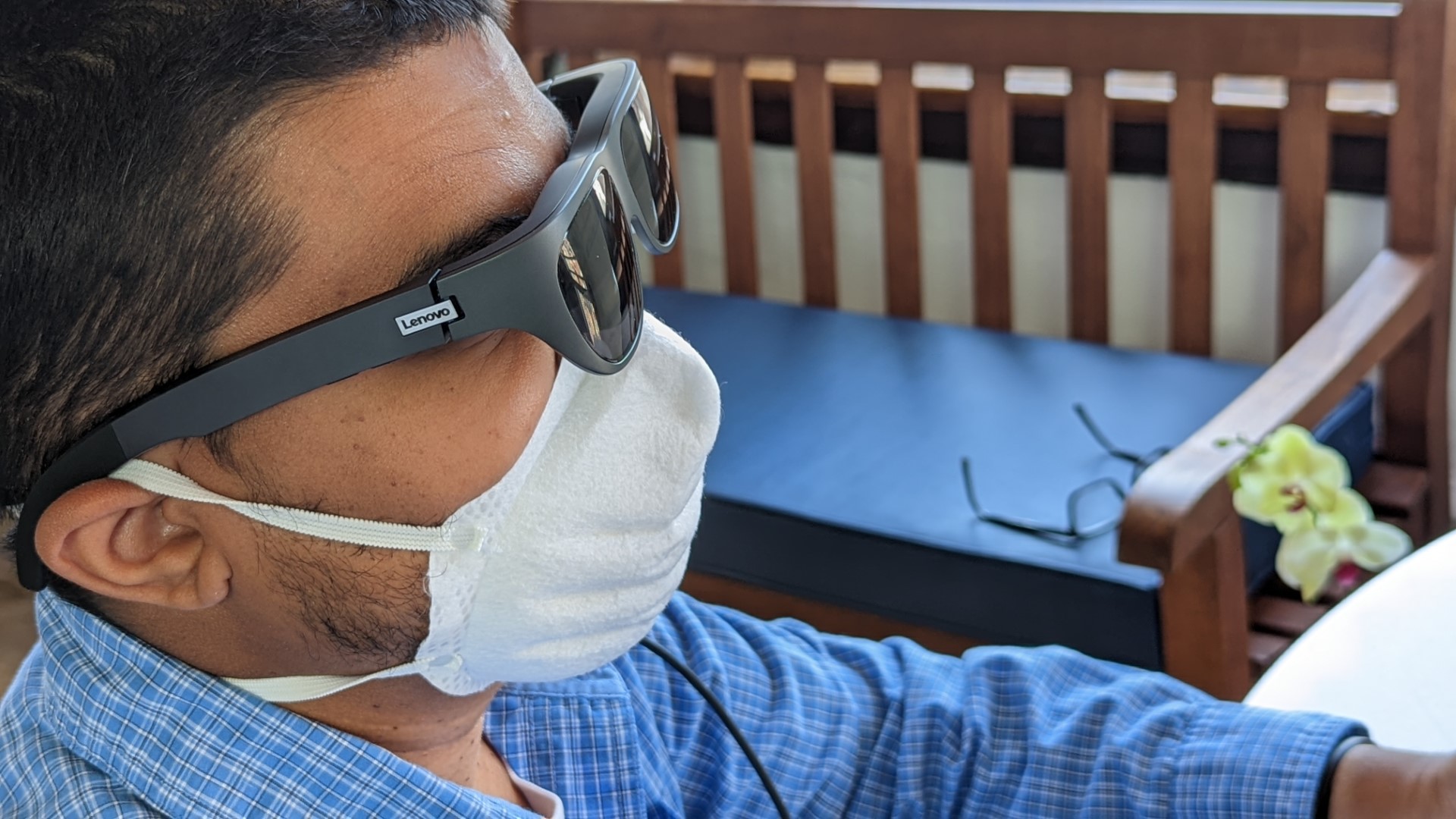 Many of us use multi-monitor setups, especially if you’re one of the people who work from home. But what if you could access those extra screens without all the extra desk space? That’s the proposition behind the Lenovo Glasses T1, a new pair of AR glasses built for work.

It’s a similar idea to Lenovo’s recent ThinkReality A3 glasses, but they were quite expensive and intended for use in customized corporate situations. The new Lenovo Glasses T1 is a toned down version designed for everyday users and workers like you and me. I got to spend some time trying out these glasses and came away excited about how they could change the future of how we work.

Lenovo has done a good job of making the T1 Glasses look like a standard pair of glasses. Aside from the USB-C cable sticking out of the side, I could barely tell the difference between the T1 and a pair of thicker, cheaper sunglasses you might find at your local drugstore.

It’s a truly compact and portable design that Lenovo says was built from the ground up. And they fit snugly on my head. Even with an N95 mask, the rubber grips on the back kept the goggles in place over my ears, and they never once moved around on my face when I used them. The T1 also folds up nicely for storage, even if it looks odd with the cable sticking out. I wish Lenovo would make this cable detachable.

I can see why this detachable cable might not work in terms of durability and long term use. Having a USB-C port on board the glasses can put them at risk of breaking, so the built-in cable helps prevent that.

However, Lenovo has thought about other critical parts of the T1 glasses design. These aren’t just glasses with a display tucked into the bottom. For convenience, Lenovo includes three additional nose pads so the glasses fit your face better.

And if you’re like me and have poor eyesight, Lenovo includes a prescription eyeglass insert in the box. You can take this to the eyeglass manufacturers and have them put your prescription lenses in the insert and then snap the lenses into the display on the inside of the T1.

This helps in terms of wear, as putting them over an existing pair of glasses is quite awkward. Trust me, I tried.

If you are familiar with augmented reality or mixed reality headsets like Lenovo Explorer and Microsoft’s HoloLens, you know these headsets have a lot of built-in sensors and sophisticated display technology. Even Lenovo’s ThinkReality A3 had multiple cameras for hand tracking and stuff.

However, like AR glasses, the T1 lacks sophisticated sensors. It’s really toned down and basic, mainly to keep the price down and make it more appealing to everyday users.

The only sensors you’ll find on board are gyroscopes. This is in addition to the speakers that sit on the sides of the glasses. There are also no external or internal cameras, but there are buttons under the side of the bezel to control brightness, volume, and lock the projected image’s orientation so it follows you.

However, this does not mean that Lenovo has left out the display technology. When I put the glasses on, I was still very pleased with the brightness and accuracy of the glasses display. Since it’s a heads-up AR, I could even see the world around me and move around safely.

Lenovo told me that the display on both lenses is Micro-OLED. Each display has 58 pixels per degree. Meanwhile, contrast is rated at 1000:1.

Connecting the T1 glasses to a phone

When I was invited to try out the Lenovo T1, I first demoed it with an Android phone — a Motorola Edge Plus to be specific. Lenovo told me the glasses will work with any Android, Windows, or iOS device, not just Motorola devices.

Unfortunately, however, there was no way for me to record or take a screenshot of this experience. However, I still think this is the best way to experience the T1 for yourself.

Plugging the Lenovo Glasses T1 into the Motorola Edge Plus brings a customized user interface to the virtual screen. I had several different choices: TV, video chat, games, mirror display or mobile desktop. To control and get to these options, the Android phone I was holding automatically had an on-screen trackpad that could be used for navigation.

The video chat option just opened Google Meet and mirrored the phone screen. TV lets me choose from pre-installed streaming apps like Netflix. Mirror Display reflects the Android phone onto the glasses, so I can play games without looking down at the phone itself.

Again, all these features depend on the connected Android device. None of this is built into the glasses themselves.

The best part, however, is the desktop mode. I was able to get a desktop experience right in front of my eyes. There is a clock area, an app panel, a volume indicator, a battery indicator and a trackpad button. I opened up the Android version of Chrome and did some web surfing, pulled up a Digital Trends YouTube video and watched it full screen in the YouTube app. Note that you can even window things in desktop mode and use your Android phone as a computer.

The experience was quite immersive, like having a computer display right on top of your glasses. I moved my head and the Android phone video followed me.

Thanks to the Micro OLED, the video itself was very bright, vivid and alive. I could see the finest details in the video, such as the background sun glare from the sun in a video featuring Samsung Odyssey Ark. Having the speakers right next to my ears helped audio-wise, as everything was loud and clear. It’s definitely a great experience.

I asked Lenovo if the same custom UI would appear with other Android phones and was told it was early software. I was also told that Samsung Dex will open on Samsung phones when the glasses are connected.

However, the T1 Glasses won’t work on Google’s Pixel phones, as they don’t support video over USB-C. On iOS, you can connect just fine via a Lighting to USB-C adapter.

Use with Windows computers

While I think the best Lenovo Glasses T1 experience is with Android phones, it also works with Windows PCs. Plug the T1 into a USB-C port on any computer and Windows will see it as an external display. In my case, I used it with a Lenovo ThinkBook.

Still, it’s a pretty unique experience. I’m used to sitting at a desk looking at my multi-monitor setup, and wearing the T1 glasses feels just as natural. I brought up an additional Microsoft Edge window and dragged it into my field of view above the T1 glasses.

At the same time, I had a main computer window open. I moved my head for pictures and the window I sent to the glasses followed. It’s quite nice to see the open window floating over the open world. It reminds me a bit of HoloLens as you see through the visualizations the world around you.

Overall, I was impressed with my first trial run with the Lenovo Glasses T1. I could see it becoming an interesting way to consume Windows and iOS media, as well as get work done using it as a secondary monitor.

It’s also private since no one will see what’s going on inside your glasses. Even in the office this would be great as you can work on important documents without people knowing or seeing them. The glasses function as an additional monitor without the entire table. Open your laptop, plug in the T1 and get to work.

The Lenovo Glasses T1 will go on sale in China first, starting in late 2022. It won’t be available for select other countries until sometime in 2023.

There’s also no price set for the product yet, though Lenovo says it’s aiming for under $500. Compared to the $1,350 ThinkReality A3, Lenovo is clearly targeting a more mainstream audience.

Henry Cavill explains why he’s waiting for the RTX 4090

The dinosaur’s navel was found on fossils

user - July 2, 2022 0
Technology
They say imitation is the sincerest form of flattery, so it looks like Elecfreaks' latest board, Pico:ed, is a tribute to micro:bit range of...