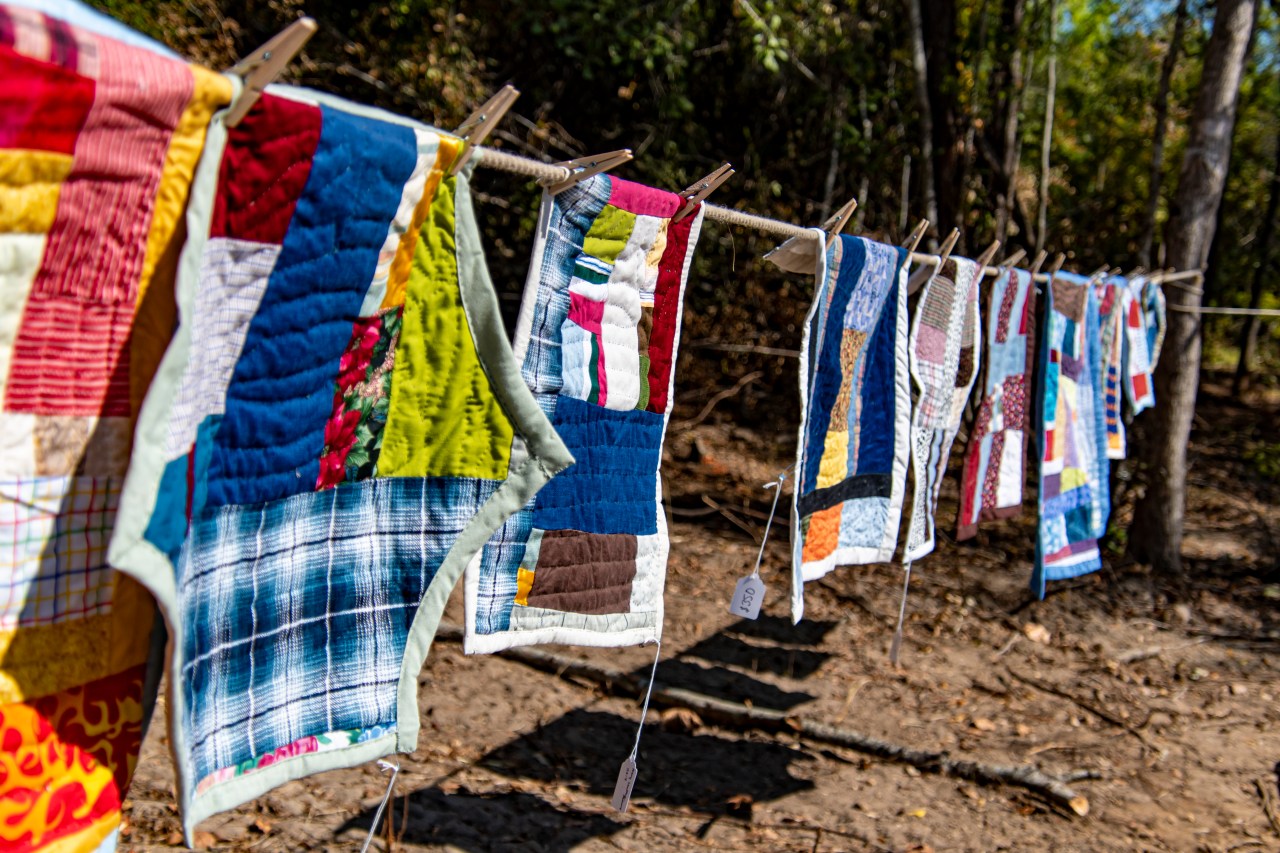 GEE’S BEND, Ala. (WIAT) – On Saturday everyone came to Gee’s Bend. They came from Birmingham and Montgomery. They came from New York and California. And they were coming right down the road.

All would come for the first time—a festival called the Airing of the Quilts—which aimed to bring the world to Gee’s Bend.

Marlene Bennett Jones, for her part, was happy for the world to come.

On Saturday, the quilter from Gee’s Bend sat at a white folding table and shared her craft. The participants in Ms. Marlene’s workshop had come to the small rural community in Wilcox County to learn from her for a few hours during the festival: to complete a pilgrimage that many had made before them.

She welcomed them with open arms, a quick mind and a quilting needle.

“Are they talking to each other well?” Mrs. Marlene looked quizzically at the Auburn state transportation worker sitting across from her. She pointed to the combination of patterned fabrics in her hand, “Are these good neighbors?”

She waited for an answer, but she already had her own answer. Marlene Bennett Jones has been distinguishing the good neighbors from the bad for more than seven decades.

A native of Bender, Ms. Marlene is one of dozens of African-American jurants whose work has been featured in art galleries and on catwalks around the world. The Gee’s Bend quilts, the New York Times once wrote, are “one of the most marvelous works of modern art produced by America.”

The rise of Gee’s Bend quilts to the pinnacle of modern art was not without flaws, however. In 2008, three Gee’s Bend quilters—Annie Mae Young, Lucinda Pettway Franklin, and Loretta Pettway—settled a lawsuit alleging that Bill Arnett, a collector of rare black art, defrauded them of the proceeds of their work. Terms of the settlement were not disclosed.

The allegations in the lawsuit gave expression to a sentiment that had long settled into the red clay of Gee’s Bend. Commercial exploitation, facilitated by the white fetishism of black culture, has always been a danger. It still is.

On Saturday, that danger seemed distant, but it loomed large. Hundreds of tourists had descended on Bend for the festival, run in part by a foundation established by Bill Arnett years before his death.

Tourists, often naive to Bend’s complex history, were eager to find connection and meaning in their visit to the remote community. Some of them tried to find this connection through Mrs. Marlene. She was happy to comply.

The transport worker asked Mrs Marlene about her family. Did you teach your grandson to quilt?

Ms. Marlene explained that she also had to spend some time outside of Gee’s Bend, traveling to Atlanta every few weeks. Isolation, she said, has its advantages. But it also comes with drawbacks.

“There’s no hospital here,” she explained. “So that makes things difficult.”

Gee’s Bend, like much of rural Alabama, suffers from a long, relentless lack of access to health care infrastructure. It’s a problem that the pandemic has made even more apparent.

Ms Marlene said she had ‘caught’ COVID-19 some time ago.

“It was really bad,” she said. Her voice trailed off as her attention turned to her work, correcting a stitch a tourist had placed too close to the edge of the fabric.

Yet in the cool October air, Mrs. Marlene does not look hopeless at all. She looks happy. Worthy. She’s proud to share her life’s work, stitch by stitch – even if it’s with tourists rather than her own, eager grandson.

A few feet away, the quilts of her family heirloom hang on a string spread between oak trees. They blow in the wind as Ms. Marlene stands her students up.

“You have to ask yourself,” she said, her eyes peeking out over her hot pink glasses. “Do they work well together? Are they talking?

She pauses for a moment.

“Will they be good neighbors?”

Do you have Verizon? Your bill is about to go up

Unions, employee groups and lawmakers have condemned threats of violence against the feds

London has emerged as the best city in Europe for cyber...

Exceptions to a HIPAA violation