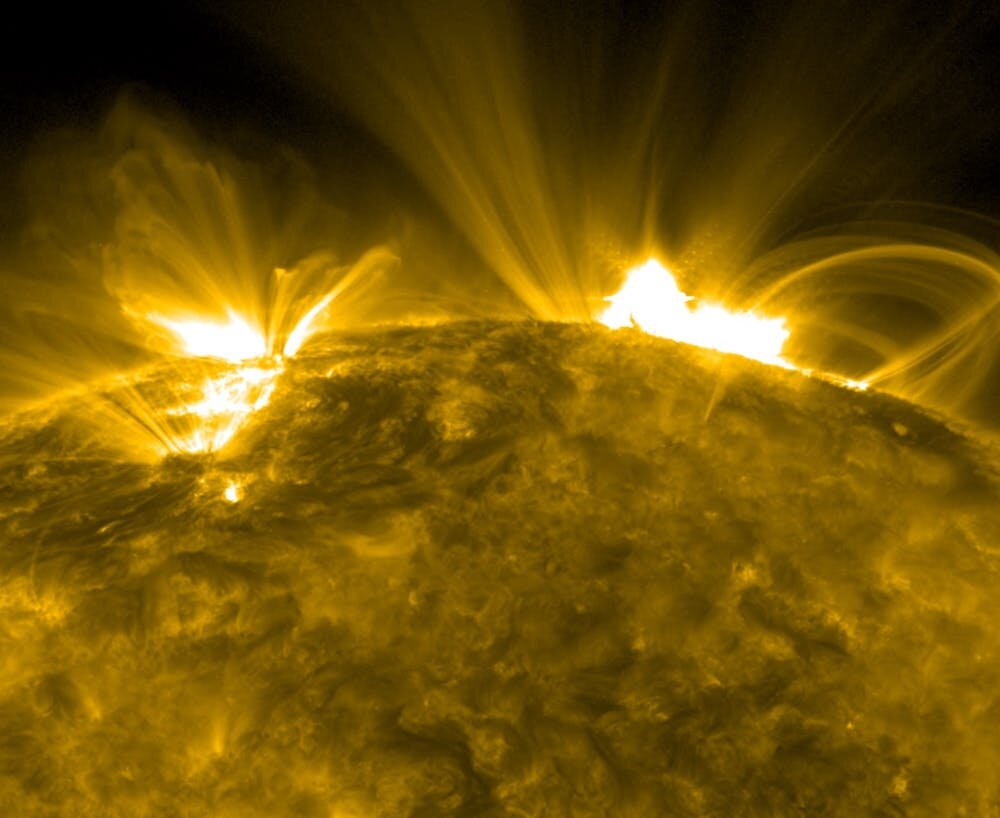 In searching for planets and studying their stars, I have had the privilege of using some of the world’s great telescopes. However, our team recently turned to an even larger system for studying space: Earth’s forests.

We analyzed radioactive signatures left in tree rings around the world to investigate mysterious “radiation storms” that have hit Earth half a dozen times over the past 10,000 years or so.

Our results, published today in Proceedings of the Royal Society Arule out “solar superflares” as the culprit, but the real cause remains unknown.

When high-energy radiation hits the upper atmosphere, it turns nitrogen atoms into radioactive carbon-14, or radiocarbon. The radiocarbon then filters through the air and oceans, into sediments and bogs, into you and me, into animals and plants—including hardwoods with annual tree rings.

For archaeologists, radiocarbon is a godsend. Once created, carbon-14 slowly and steadily decays back into nitrogen – meaning it can be used as a clock to measure the age of organic samples, in so-called radiocarbon dating.

This means that the rise and fall of carbon-14 levels in tree rings encodes a history of The 11-year cycle of the solar dynamo (which creates the sun’s magnetic field) and reversals of Earth’s magnetic field.

But tree rings also record events that we cannot currently explain. In 2012, Japanese physicist Fusa Miyake found a spike in radiocarbon dating of AD 774 tree rings. It was so large that several ordinary years’ worth of cosmic rays must have arrived at once.

They have already revolutionized archaeology. Finding one of these short, sharp spikes in an ancient sample reduces its date to one yearinstead of the decades or centuries of uncertainty from ordinary radiocarbon dating.

Among other things, our colleagues have used the 993 AD event to reveal the exact year of the first European settlement in the Americas, the Viking village at L’Anse aux Meadows in Newfoundland: AD 1021.

In physics and astronomy, these Miyake events remain a mystery.

How is such a huge pulse of radiation produced? Multiple papers accuse supernovae, gamma rays, explosions from magnetized neutron starsand even comets.

whatever the most widely accepted explanation is that the Miyake events are “solar superflares”. These hypothetical solar flares would be perhaps 50-100 times more energetic than the largest recorded in the modern era, Carrington event since 1859

If such an event were to happen today, it would devastated power grids, telecommunications and satellites. If they happen randomly, about once every thousand years, that’s a 1% chance per decade – a serious risk.

Our team at UQ set about sifting through all available tree-ring data and extracting the intensity, timing and duration of Miyake events.

To do this, we had to develop software to solve a system of equations which model how radiocarbon filters through the whole global carbon cycleto find out what fraction ends up in trees in what years, as opposed to oceans, swamps, or you and me.

Working with archaeologists, we have just released the first reproducible, systematic study of all 98 trees with published data at Miyake events. We have also released open source modeling software as a platform for future work.

Our results confirm that each event delivers radiation for one to four typical years at a time. Earlier studies suggested that trees closer to Earth’s poles would register a larger spike – which we would expect if solar superflares were responsible – but our work, looking at a larger sample of trees, shows that this is not the case .

We also found that these events can arrive at any point in the sun’s 11-year cycle of activity. Solar flares, on the other hand, tend to happen around cycle peak.

Most puzzlingly, several of the peaks appear to take longer than can be explained by the slow creep of new radiocarbon through the carbon cycle. This suggests that either the events can sometimes take more than a year, which is not expected for a giant solar flare, or the tree growing seasons are not as uniform as previously thought.

For my money, the sun is still the most likely culprit for Miyake’s events. However, our results suggest that we are seeing something more like a storm of solar flares than a huge superflare.

To determine exactly what is going on in these events, we will need more data to give us a better picture of the events we already know about. To get this data we will need more tree rings and also other sources such as ice cores from the Arctic and Antarctic.

It is truly an interdisciplinary science. I usually think of beautifully clean, precise telescopes: it’s much harder to understand the complex, interconnected Earth.

Brought to you by The Conversation


This article was republished by The conversation under a Creative Commons license. Read on original article.

Apple sold over 1.2 million iPhones in India in the second quarter, recording 94%...

Try these hidden photo tricks on your smartphone

Up to half of drinking water quality problems

user - September 30, 2022 0
Electronics
Annual reports from the UK's drinking water watchdog show that water supplies in England and Wales are among the best in the world, with...

This giant bacterium is the largest ever discovered

Use ADFS OIDC as the IdP for an Amazon SageMaker Ground...