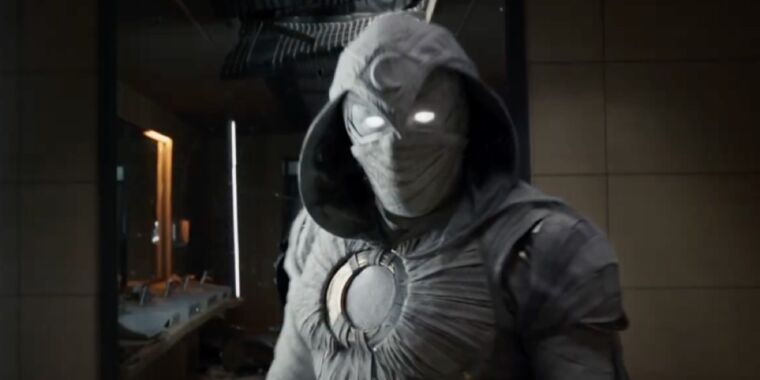 Can anything good ever come from the interference of the gods in the affairs of men? This is the main conundrum Moon Knight, the latest spinoff series in phase 4 of the MCU, and in the case of the series the answer is a resounding yes. Featuring Oscar Isaac as a Tortured Man with Dissociative Identity Disorder (DID), the series has more to do with Netflix Defenders series than at recent Marvel prices such as Wanda Vision, the Falcon and the Winter Soldierand Loki. But instead of taking place at Hell’s Kitchen in New York, he tells a unique story about the origins of the superhero, rich in symbolism and Egyptian mythology.

(Some spoilers below for comics and TV series. All the big revelations are at the very end and we’ll let you know when we get there.)

As I wrote earlier, in the comics, Mark Spector (also known as Moon Knight) is the son of a rabbi, marked at an early age by the Egyptian moon god Honshu as an avatar of the god of the earth. But Khonshu is a supernatural being with many aspects of his nature – and also exists out of phase with normal time and space – so building a mental connection with the human Mark is detrimental to human mental health.

Mark developed DID, eventually becoming a mercenary. He was hired by the ruthlessly immoral Raul Bushman for a job in which the latter killed an archaeologist who discovered an Egyptian tomb. Mark rescues the archaeologist’s daughter, Marlene, leading to a major battle with Bushman. Mark loses the battle and is left to die, but the locals take him to the tomb and leave him in front of a statue of Honshu. Honshu revives and heals the dying Mark.

When Mark returns to the United States, he directs all the money he has made from the mercenary to fighting crime like the Moon Knight, recognizable by his silver nose. He has four other different identities in the comics: a billionaire businessman named Stephen Grant, a taxi driver named Jake Lockley, a costume consultant named Mr. Knight and a little red-haired girl named Inner Child. Showrunner Jeremy Slater retained the general outline of the series’ origins, with a few key differences.

The first person we meet is Stephen Grant, not a billionaire, but an awkward, soft-spoken Briton who works in a souvenir shop in London and longs to share his knowledge of Egyptian history and culture as a tour guide. His professional and romantic prospects are bleak because he is tormented by eclipses. He even goes so far as to be bedridden at night, yet he often regains consciousness in unfamiliar environments.

One of these eclipses drives the events in the show. Stephen wakes up in the Austrian Alps and finds himself in the middle of a confrontation with Arthur Harrow (Ethan Hawke), a charismatic cult leader who insists that Stephen give him an Egyptian scarab that he accidentally holds. A mysterious force prevents Stephen from doing so, while a voice in his head complains that the “idiot” is in the lead again. Stephen darkens again and is covered in blood, and the bodies of Harrow’s men are all around him. Eclipses and a car chase followed. Let’s just say that eclipses and eclipses while driving at high speeds on a narrow mountain road – with heavily armed evil supporters in pursuit – are not a safe way to travel.

This is a very effective start to this series because we share Stephen’s disorientation and confusion as he tries to figure out what’s going on with him. Eventually, Mark Spector, the mercenary, reveals himself and explains that he is the avatar of Honshu, an exile among the Egyptian gods for his crusade against the injustice of mankind. (F. Murray Abraham voices Honshu while Karim El Hakim portrays him physically.) Mark is estranged from his wife, Leila El-Fawli (May Kalamawi), the daughter of an Egyptologist killed by mercenaries.

As for Harrow, he was once an avatar of Honshu, but changed his allegiance to the Egyptian goddess Amit, who was imprisoned by other gods. It is even more radical than Honshu, judging the hearts of human beings for the good or evil they will do, not just for the sins they have already committed. The scarab will reveal the location of Amit’s tomb so that Harrow can free it and let Amit judge the world. Mark and Stephen need to figure out how to share the body and work together to thwart Harrow’s plan with Layla’s help. Oh, and there may just be a third person lurking in their common body that only appears when things happen really bad.

Slater proves to be a talented storyteller, weaving all the threads of this complex story into a seamless whole as he explores the themes of identity and recovery from trauma. Bonus: The whole series is beautifully shot, with great decor and costume design. This is the classic mythological journey of the hero in many ways, all the way to the journey to the afterlife, but much of this journey takes place in the minds (s) of Mark and Stephen. This kind of inner psychological journey can be difficult to portray in a constantly engaging way, but Slater does it successfully. I especially appreciated the skillful symbolic use of mirrors everywhere to convey a broken self.

Much of the credit for the show’s success is due to Isaac’s captivating performance. He seems to effortlessly move between two distinctive personalities, complemented by unique accents and body language, and handles action sequences with aplomb. The native Britons will undoubtedly tremble at Isaac’s alleged London accent, but the actor said he deliberately made it “strange and unconvincing”. This is what a traumatized young boy in the process of splitting into two would consider a British accent, so for my money the choice makes sense.

AI as a Service (AIaaS): Unlocking greater productivity and profitability from AI deployment

BharatX’s built-in credit fintech receives $ 4.5 million from YC and others

MIT engineers are developing ultrasound stickers that can see inside the...

user - July 30, 2022 0
Technology
MIT engineers have designed a patch that creates ultrasound images of the body. The stamp-sized device adheres to the skin and can provide...

The USAF has three F-35As in Palau for the Valiant Shield...