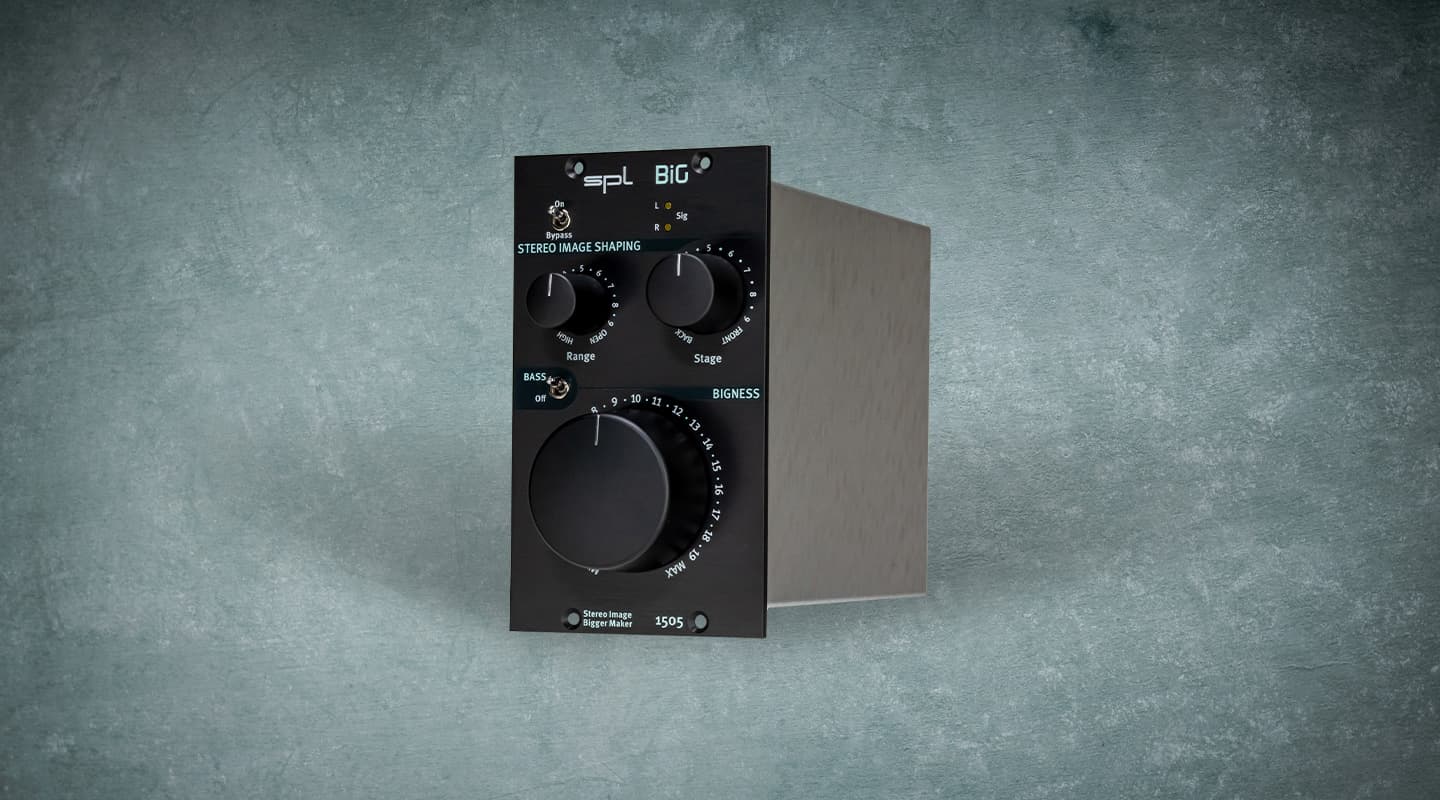 SPL is no stranger to stereo enhancement or harmonic excitation processing, so it makes sense to release a stand-alone 500 series model that takes on both roles. With only three continuously variable controls and a few switches on the double-width faceplate, the BiG is sparsely populated by this format’s standards. Make no mistake though, the sound this unit produces is certainly not shy, nor is it a one-trick pony. BiG also features what is arguably the largest rotary knob in the entire 500 series universe.

IT TAKES THREE TO TANGO

SPL is reluctant – both in the printed manual and on the internet – to provide technical details about what is going on with the processing used in BIG. You really have to embrace its somewhat deliberate parameter names and secret audio sauces and just start tweaking. When you do, SPL BiG proves to be a deceptively complex and useful tool.

The “Range” knob is actually something between a high-pass filter and a standard frequency control, and the “Stage” knob determines how much the effect is pushed to the front or back of the mix. They are designed to be used in tandem and each influences the other. The Volume control then increases the overall effect of these by a little or a lot relative to the dry signal.

Users of the SPL’s older sibling, the Stereo Vitalizer, will be familiar with some of this topology, although the BiG does things a little differently, both in terms of performance and sound. Hooked up through a mix bus, the effect is certainly ‘big’ and bold. Starting with ‘Range’ set counterclockwise near the maximum ‘High’ setting and ‘Stage’ set clockwise until around three o’clock, it’s immediately apparent when you turn up the ‘Bigness’ control even just a little bit – yes say, 1 or 2 on the dial – that something quite important is happening to the stereo image. It gets even more dramatic from there.

Once “Bigness” is pushed above half, there is a noticeable harmonic excitement in the upper frequencies, the stereo image becomes wider and louder at the sides, and stereo effects such as reverberation and time-based modulations become more audible. It’s a bit like listening to your mix through one set of speakers while someone takes a feed from your mix, applies some stereophonic excitement to it, sets up another pair of speakers outside of yours, and slowly boosts them.

Moving the ‘Stage’ control clockwise towards the ‘Open’ end and pushing the ‘Bigness’ up towards 10 results in some pretty nasty distortion artefacts, but also lets you really hear which parts of the audio are affected the most a lot. Turning the Range control clockwise moves the effect’s emphasis down to the midrange, making the effect fuller. Here you can hear the weight of a piano, the power of electric guitar sounds or vocals that really cut through in widescreen stereo. It really is a pretty dramatic overhaul of mix performance even at lower settings, so you have to be pretty careful when using this unit in a mix bus context.

I often found myself switching my mix to mono to check what was being added to the side of the mix. When the overall volume of the mono mix started to decrease compared to the stereo version, I knew I had gone too far. Toggling the Bypass switch regularly is also a good idea. A more subtle version of these effects is available when you move the Scene control counterclockwise to the Back setting. This reduces reverberations and other mix effects and tightens the sound, making a less dramatic impact on the overall mix. Here the upper frequencies are de-emphasized and more natural extension effects are available.

I NEED TO KNOW

Pushing just a few mix elements to hyperwide is an old trick, but SPL BiG makes it feel new again

When the ‘Bass’ switch is on, the BiG also provides a nice heavy boost to the low frequencies that really thickens the mix. It’s a smooth and tasty extension low down and I found it very useful in balancing the higher frequency emphasis of the Range and Size controls to achieve or more even “impoverishment”or sound pleasant ‘smile on the face’ EQ curve. The Bass enhancement is a very handy addition to the device and complements the other parameters well.

At first I thought the SPL BiG would be the perfect stereo mix-bus tool, but after working with it for a while I found other workflows that probably make better use of its aggressive nature. In the role of a parallel signal processor, I found the BiG to be very effective at spreading the stereo field and adding weight and character to a full mix without any noticeable phase artifacts. Working this way with BiG — as I often do with Stereo Vitalizer — I got some very tasty results. Outputting the processing to a pair of faders allowed me to be as subtle or aggressive as I wanted, either paralleling the entire mix or selecting only certain elements of the mix.

Taking things further back, I experimented with processing just keyboards, strings or backing vocals through the BiG, and I liked how this approach allowed me to really push certain characteristics of those sources. The power and drive of the downbeat piano and ethereal high female backing vocals were a real highlight here. Pushing just a few mix elements to hyperwide is an old trick, but the SPL BiG makes it feel new again. Available tonal and stereo processing gives users many options in how these elements are projected.

SPL’s BiG challenges you to expand your mixes beyond the standard boundaries of the stereo field. While there are dangers in the “other world,” the rewards can be great, and BiG provides a wide variety of nice-sounding colors with just a few well-chosen controls. The sound quality is undeniable, but while the aggressive nature of the processing may be too much for some situations, there are others where it provides a whole host of new possibilities. Stereo spreading and bass enhancement really add new dimensions to the mix and, when used wisely, can help you take your sounds to the next level.

What the next Prime Minister must do to keep Britain’s tech...

user - July 28, 2022 0
Technology
As the curtain falls on Boris Johnson's eventful Prime Ministership, it represents an opportune time for the UK tech sector to reflect on his...

Apple’s most popular products available at the Apple Store in Cedar...