Newstechok.com
Home Science See the oldest view of our known universe, just revealed by the... 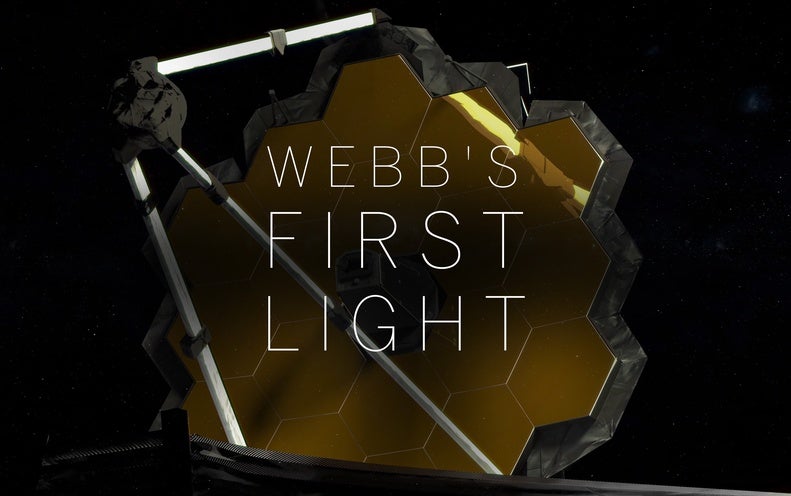 Lee Billings: This is the picture we’ve all been waiting for, the deepest image of space ever taken. Humanity has never seen so far back and so clearly into the depths of the universe’s history. The many nameless galaxies you see here emitted their light more than 13 billion years ago, mere cosmic moments after the Big Bang. This one image and the countless others to come are the result of more than two decades of focused effort by some of the world’s greatest scientists and engineers.

From concept to build and test, from launch to deployment and commissioning into the cold depths of space from opening new eyes to space to collecting and processing data to ensure it sees more clearly than ever before.

Gregory Robinson: These are just the first pictures. Think about the multi-year imaging and other things we’ll learn with this telescope about potentially habitable planets. We’ll learn a lot from this over time, not just the first images.

And I just can’t figure out what it could be.

Billings: Our time machine is the James Webb Space Telescope, or JWST, a one-of-a-kind observatory designed to reveal how the universe began to shine and much, much more.

Hamel: The first year of Webb Science will be very exciting. The programs that we have been planning for 20 years, most of them will be implemented in this first year – to see the first light in the universe, the first galaxies that have formed. We will explore the atmospheres of planets around other stars. We will look for the first time at the surface chemistry of objects in our solar system that are too faint to be seen by our current telescopes.
Science will flow and it will be amazing.

Billings: It is the largest and most ambitious space telescope ever built. And it promises to create some of the most amazing discoveries in our lifetimes and beyond.

Matt Mountain: The Big Bang happened 13.8 billion years ago. And then Hubble sees back to roughly 13.5 billion years. But they see all these galaxies.

Ken Sembach: Over time, as the space-time continuum stretched as the universe expanded, light itself stretched. As this light traverses the universe, it becomes redder and has been on its way for 13 and a half billion years.

Mountain: That’s why it had to be infrared, as it had to go beyond what the Hubble Space Telescope could see.

Hamel: Traditional telescopes have mirrors, lenses and other things and are encased in tubes. Pipes emit heat. Any structure you have is naturally warm. Simply because the sunlight falling on it warms it.

Mountain: If it is warm, it gives off its own heat. Well, for the infrared telescope we have to somehow turn off that telescope light. And we do that by cooling it down to that -380 degrees Fahrenheit. Thus the telescope disappears.

Hamel: These considerations are what led us to have this exposed mirror and thin secondaries and giant sun shields. All of this is designed to keep the telescope and its mirrors as cold as possible.

Mountain: We can actually detect the heat of a bumblebee if it has flown on the surface of the moon. But that’s how sensitive this telescope is – as long as we can cool the telescope itself down to that -380 degrees from that cryogenic temperature.

Keith Parrish: I have to admit I laughed a lot in the early days because we didn’t know how to do this. So those early days were really just figuring out what technologies needed to be invented. What was not there at the time. And then we lay them out in a systematic way how to go from not existing to existing.

Billings: JWST’s starlight, captured by a six-and-a-half meter segmented mirror, is more than the observatory’s eye can see. The mirror is really its heart – the most vital central part that gives life to the whole. Nothing like it has ever been done or is likely to be done again in both form and function. It’s not so much a mirror as it is a monument to the great things people can do when we come together in pursuit of pure discovery.

Parish: When you think about the level of precision in this whole thing, it didn’t want to exist and really required sheer will. It’s been a real privilege for me, is to be able to watch, you know, some incredibly talented people just pour all their energy into it and pretty much do it.

Billings: There are actuators for each segment that can change their position in the curvature by millimeters up to a few thousandths of the width of a human hair. In total, they will ensure that 18 main segments are aligned as if they were one monolithic mirror. It’s essentially like having 18 separate telescopes because the 18 segments initially point in different directions.

They all share a secondary mirror, but each of the segments is a unique eye to the sky. These mirrors are complicated. Each primary mirror segment has seven actuators, six of them move, the segment has a rigid body that tilts and tilts, moves forward and backward, even rotates slightly, giving each segment six degrees of freedom.

Mountain: This mirror had to be so smooth that if you stretched the entire mirror across the Atlantic Ocean, you couldn’t get more than about three-quarters of an inch. That’s how smooth this was supposed to be. But it should have been as smooth at -380 degrees Fahrenheit at room temperature. Every material bends and twists when we take it from room temperature, nickel, all the way to this incredibly cold cryogenic temperature, as we call it.

So the only way to do this is every segment. We actually had to polish it incorrectly. What we did was we posted it perfectly at room temperature. We rang all the way down. It will then bend and twist. We measured all those bends and twists very carefully, reheated it, and then polished all those mistakes so that when it cooled again, it cooled to exactly the right shape.

This proved quite difficult to do. And we had to build this big test chamber specifically at the Marshall Space Flight Center. We had to have the right material that would actually predictably bend back into the right shape. You know, it was called cryopolishing, which basically meant we had to polish it wrong, but perfectly wrong, so that when it cooled, it bent back to just the right shape, so when we put all these segments together and then we used electronics and actuators to hang it, we could get this incredibly smooth six meter prime that would give us the image quality we were looking for.

Billings: JWST will see further and more clearly into the past than any observatory that has come before, but it is truly a facility for the future. It will be the engine of discovery for the next generation of scientists. Opening new windows to the universe.

Ceyhan Karteltepe: All nominal is my new favorite word that gets vague every time. This is nominal.

Hamel: Oh, I suspect they’ll come up with some questions we haven’t thought of asking yet.

We laid that foundation, but actually others will take the science forward now.

Becky Smethurst: Oh hey, there it is. I mean, beauty, man. Oh my gosh. Look at all these things folded.

Billings: JWST may find the first evidence that just as life appeared here, it also appeared there. Could a telescope rewrite every chapter in our textbooks about the universe? It’s time to find out.

Zembach: Oh, I think it will dramatically change the way we see the universe, no doubt. A lot of science and I think the discoveries that will come will be things that we haven’t even thought about yet.

Hamel: People like me who have been working on this program for decades, our time is meant to cover the full range of scientific possibilities.

Hamel: There will be science related to exoplanets and looking at some of the closest and brightest exoplanets to try to study the atmospheres of these exoplanets.

Mountain: When we first discovered exoplanets, we assumed they would look like Earth or our solar system. What we’ve found now, all these exoplanets come from a wide variety of different solar systems, a huge variety, much more than our original models told us was possible.

Hamel: And there will be observations in our solar system as well. Looking at Jupiter’s Great Red Spot, looking at distant Kuiper Belt objects to find out what their surface chemistry is. All of this science will happen in Webb’s first year of operation. It’s going to be really exciting.

Billings: Breaking through the darkness to reveal the first light is just the beginning. Billions of dollars and a lifetime of work have brought us to this historic moment when the science of JWST begins. But all this is only the first step of a journey of discovery that will take us from the first rays of the cosmic dawn to the very ends of the universe.

What mysteries and treasures await us along the way? And the unfathomable depths of heaven? We’re about to find out.

In the big chair – Rajesh Magow of MakeMyTrip

Amazon is killing its Glow interactive video device for kids

Space station experiment to study the origin of the elements

How the US Navy is testing submarine technology in Idaho