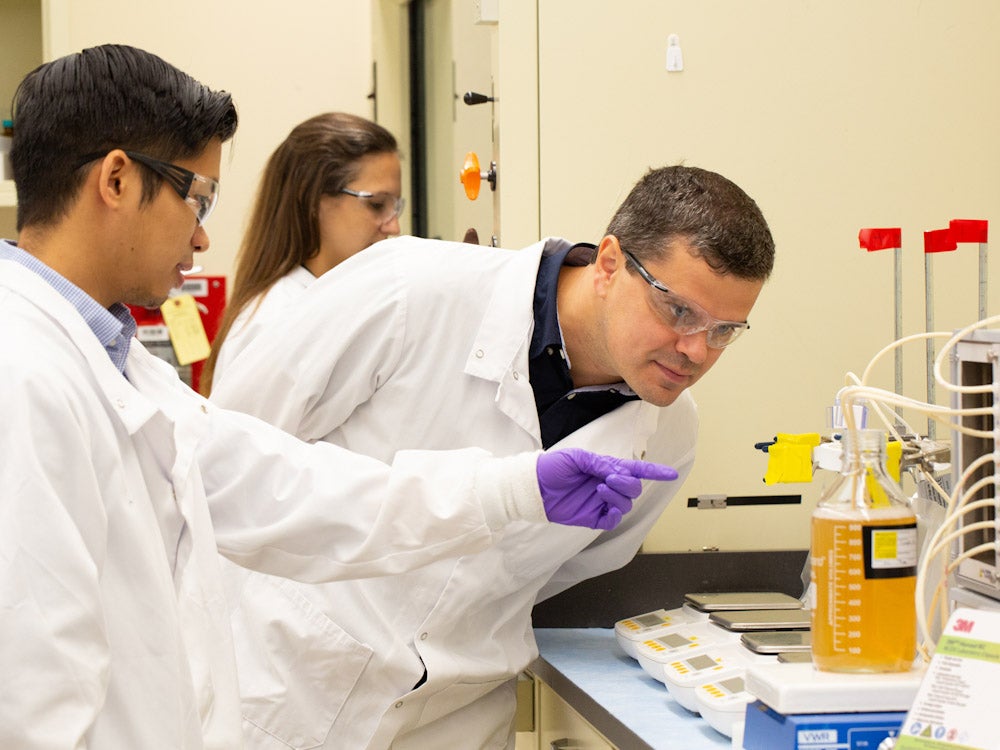 Biopharma companies are under pressure to do more with less in the production of monoclonal antibody (mAb) therapies. Efficiencies in processes are highly sought.

Biopharma companies are under constant pressure to improve productivity, maintain product purity, and cut costs. Yet this is far from straightforward. Process intensification is desired, but there are barriers to making processes more efficient.

Chromatography and clarification play vital parts in biopharma manufacturing, yet there is room for improvement in processes to eliminate inefficiencies and increase yield.

Single-stage clarification technologies, such as 3M™ Harvest RC Chromatographic Clarifier, could play a vital role in this journey, by simplifying what would otherwise be a time-consuming and complex
clarification train.

This document delves into the history of chromatography and clarification, addresses problems, proposes solutions, and offers a glimpse into what the future may look like after a revolution in biopharma production processing. Download to learn more.

Yet when it comes to the crucial step of harvest clarification – the first step when impurities start getting removed – existing technologies are struggling to keep pace with developments in the upstream process, leading to product losses and increased complexity.

The main objective for harvest and clarification processes is to eliminate cells and related debris from the cell culture fluid, effectively keeping what is needed and removing what isn’t, to obtain material that is suitable to apply to chromatography columns downstream.

Traditionally, clarification processes to prepare cell cultures for filtration through a sterilising-grade membrane require two or three stages. These can include centrifugation and depth filtration. However, these processes can damage cells, resulting in more impurities in the downstream process to remove and decreasing the product quality.

One technology that could revolutionise clarification in biopharma production is 3M™ Harvest RC Chromatographic Clarifier. It is a single-stage, single-use chromatographic purification solution designed for use in manufacturing recombinant protein therapeutics. It removes the need for centrifugation and depth filtration processes to purify proteins more efficiently, turning multiple stages into one.

What are some of the recurring problems with harvest clarification?

Dr Hani El-Sabbahy: “One of the key things is the drive to make the bioreactor more productive. And there are two main ways of doing that. The first is to increase the specific productivity of the cells.

“The second is to increase the number of cells per unit volume. In reality, it is usually a combination of both. However, this comes with a cost. Higher cell density results in both more solids to remove during clarification and more soluble impurities. Increased specific productivity also results in increased levels of impurities. So, both increase the burden on the rest of the downstream process.

“When you consider clarification, size and density-based techniques such as centrifugation and depth filtration perform less well as you increase the cell density. If we take the example of depth filtration, a lower throughput means that you need to apply more filter area to clarify the same amount of cell culture fluid. There comes a point where fluid lost in the media results in very significant losses over each stage and the losses are higher the more steps you have. This is a problem the industry is seeing quite a lot at the moment with the existing clarification technology.”

Effectively clearing DNA early in the process before Protein A can lower host cell proteins (HCPs) in the Protein A eluate. It is important to evaluate the process holistically. And there are many more benefits that 3M™ Harvest RC Chromatographic Clarifier brings beyond this step.

Are there any inefficiencies in chromatography?

Dr El-Sabbahy: “Yes. Particularly around the capture step in the mAb process – the Protein A column – one of the main inefficiencies comes from high levels of DNA present in the clarified cell culture fluid. DNA in the form of chromatin has been shown to inhibit the performance of the Protein A column, resulting in reduced purity of the eluate. Additionally, capacity fade with increasing cycles can be a problem due to the fouling of the Protein A column.

“Problematic host cell proteins can also interact with your monoclonal antibody product and chromatin and make their way into the polishing train – a phenomenon known as hitchhiking. That can cause you problems later, including degrading the product or excipients, and can require additional chromatography steps to remove them.

“Reduced efficiency of the Protein A column also means that the rest of the polishing train has more to deal with. Consequently, the size and number of subsequent chromatography steps may be adversely affected.”

What are some of the main consequences of these factors in the production of mAb therapies?

Dr El-Sabbahy: “As we discussed, high cell density cell cultures lead to bottlenecks in clarification and increase the burden on the rest of the downstream process. That results in less efficient clarification, less efficient capture, less efficient polishing, and ultimately a lower yield. All these inefficiencies and dealing with the increase in impurities will negatively impact the total product cost.”

“If you compare it to a depth filter, for example, it is 70% porous. Whereas that depth filter is around 30% porous. So, there is a lot more volume inside the media to capture those whole cells and debris. That makes the media much more efficient. It’s also single stage, which means you don’t have the same compound product losses you have in multistage clarification trains.

“If you think about how those two things work together, they enable a much more efficient single-stage operation, which reduces the overall loss of product during clarification.

“Also, we have shown with an earlier product that clearance of DNA during clarification increases the performance of the Protein A column in terms of eluate purity and the propensity of impurities to aggregate after Protein A. This can be seen in the research paper entitled ‘Chromatographic clarification overcomes chromatin‐mediated hitch‐hiking interactions on Protein A capture column’. So, we expect those same benefits.”

What makes its fibrous chromatographic clarification technology so effective? And how does it compare with conventional solutions?

“There is also limitation around the amount of volume in the depth filter media that is available for the capture of cells, which is about 30%. The fibrous chromatography media in 3M Harvest RC Chromatographic Clarifier has 70% of the media volume available for the capture of cells, cell debris and insoluble impurities, making it much more efficient.”

How much can 3M Harvest RC Chromatographic Clarifier technology accelerate the development of biopharma manufacturing?

Dr El-Sabbahy: “One of the key things is that is available in much smaller sizes. It’s a much more uniform media than cellulose-based depth filters.

“It is also a single-stage, single-grade solution. And you can deal with volumes from the very small right the way up to the manufacturing scale. Since there isn’t a need to screen multiple grades, there is the potential to shorten process development timelines. Additionally, any development work done on a small scale is applicable to a large scale because the impurity profile is consistent.

“It does enable efficient scaleup. But it also enables high-quality screening, with similar impurities profiles to larger lab and manufacturing scales.”

What sort of production scale has the technology been proven on?

Dr El-Sabbahy: “We have tested them on bioreactors up to 5,000 litres and have some really nice data. We have some very promising results in terms of the reduction in the footprint and the overall performance.

“All of these lead to reduced manufacturing costs – particularly the increased yield. To put it into context, if you can increase your yield by 10%, then you need to run your processes nine times instead of ten to make the same amount of product.”

To learn more about how 3M is leading the revolution in biopharma production for chromatography and clarification, download the whitepaper below.

Biopharma companies are under constant pressure to improve productivity, maintain product purity, and cut costs. Yet this is far from straightforward. Process intensification is desired, but there are barriers to making processes more efficient.

Chromatography and clarification play vital parts in biopharma manufacturing, yet there is room for improvement in processes to eliminate inefficiencies and increase yield.

Single-stage clarification technologies, such as 3M™ Harvest RC Chromatographic Clarifier, could play a vital role in this journey, by simplifying what would otherwise be a time-consuming and complex
clarification train.

This document delves into the history of chromatography and clarification, addresses problems, proposes solutions, and offers a glimpse into what the future may look like after a revolution in biopharma production processing. Download to learn more.

Cooling and purifying fans to overcome the heat

Elon Musk once again claims that one day Tesla will become bigger than Apple...

Europe is seeing a surge in cybersecurity job vacancies in the...