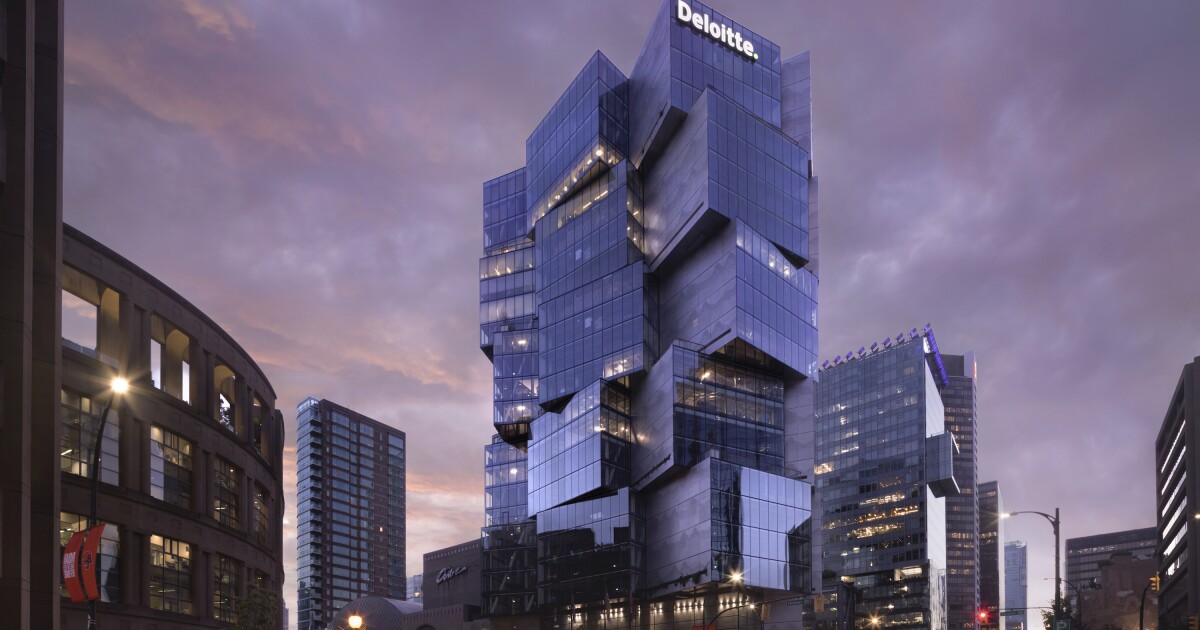 Taking the form of a collection of stacked glass cubes, the Deloitte Summit, by OSO, offers a definite change from the rather ordinary rectangular towers that dot major cities around the world. The eye-catching skyscraper rises to a height of 90 m (295 ft) in Vancouver, Canada, and its unusual shape creates flexible office space and multiple outdoor terraces.

Designed in collaboration with Merrick Architecture, with landscaping by HAPA Collective, Deloitte Summit’s unusual form appears almost arbitrary, but follows a careful design to create an open and flexible interior. Structurally, the glass cubes are supported by a steel frame and centered around a concrete core that houses the elevator and staircases.

“While the shape and materiality of the tower give the impression of arbitrariness, the underlying structure is based on simple rules,” OSO explained. “The main element of the building is the four-story high glass cube. Six of these cubes are grouped together around a central shaft to complete a floor. Overall, there are three main groups (three typical floors), two of which are repeated. The glazing and cladding systems on the facade are based on a single module, and the structural system is repeated throughout the building.

“The majority of the building is held up by a central elevator core and six ‘mega-columns’ that penetrate all floors. There are no other columns in the center of the floor slab, only trusses along the facade that carry the perimeter loads from one cantilevered volume to another. Because it is mostly unobstructed by columns, the interior feels wide and open. From the outside, the weightlessness quality of the building is enhanced by the lack of interlocking details where the boxes stack, creating the illusion of sliding volumes.”

Although you can’t see anything in the photos yet, significant greenery has been planted on the multiple outdoor terraces and will continue to grow over time. The skyscraper also boasts Vancouver’s largest rooftop terrace, which has even more greenery while offering excellent views of the surrounding mountains.

The project was commissioned by Canadian developer Westbank, which is the firm behind Kengo Kuma’s upcoming Park Habitat. OSO and Westbank have also joined forces for another unusual project which is currently underway and will include installation of a Boeing 747 aircraft between two skyscrapers in Seattle.

Tiger Global, fickle checks and the difficulty of acceleration • TechCrunch

user - September 24, 2022 0
Technology
Welcome to Startups Weekly, a fresh look at this week's startup news and trends. To get this in your inbox, subscribe here. When On...

Nothing The display specifications of the phone (1) are not the...