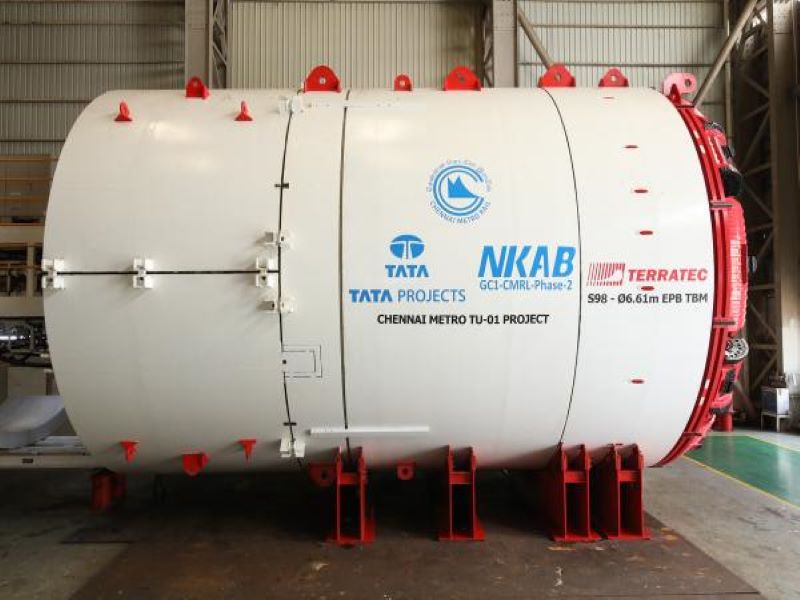 The 6.61 m diameter machine will be used by Tata Projects to carry out underground work on the Phase II corridors of the Chennai Metro.

As part of the Chennai Metro tunneling contract, the new Tunnel Boring Machines (TBMs) will be used for the construction of Phase Two – Corridor Three from Venugopal Nagar Station to Kellys Station.

The scope of work includes the construction of 18 km of bored tunnels. Terratec supplied five of the seven TBMs required for the package.

At the beginning of this year, Terratec began supplying TBMs.

The first TBM S96 to be delivered to site is being assembled. It will soon deliver the second TBM S97, while the third TBM S98 was dispatched after recently completing the Factory Acceptance Test (FAT).

After completion of the assembly process, the three TBMs will begin excavation work for the 15 km tunnels for package TU-01.

The works also cover the launching and equipping of extraction shafts at these stations.

Terratec said the project’s “main challenges will include tunneling under historic structures in built-up areas.”

The firm’s TBMs feature dome-style cutting heads with a mixed base, which are said to be ideal for mixed geology.

The Spanish Ministry of Defense receives the THEMIS UGV from Milrem...

Airbnb continues to insist on simply getting a hotel room