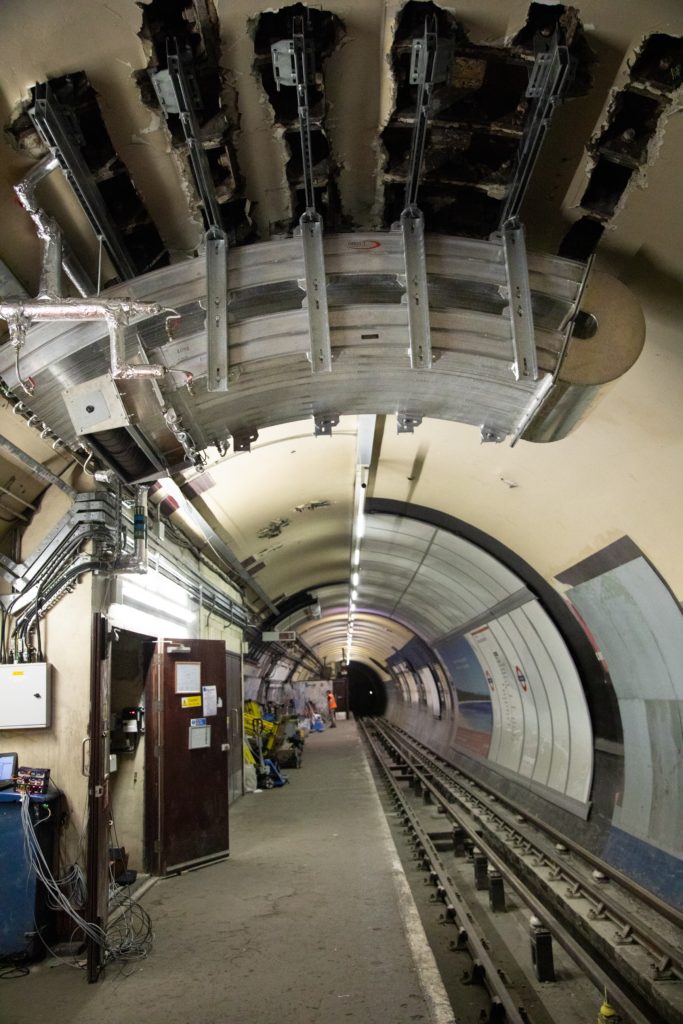 Transport for London (TfL) is currently testing a modern cooling panel on a disused platform at Holborn Station to test its suitability for reducing temperatures on the Tube’s deep network – Bakerloo, Central, Jubilee, Northern, Piccadilly, Victoria and Waterloo & City lines .

TfL’s ordeal comes as the UK experienced its hottest temperatures on record earlier this week. The cooling panel aims to provide cooler air to passengers waiting on the platforms, as well as to mitigate the potential temperature rises associated with running an increased number of trains on the Piccadilly line, as part of the line’s future capacity upgrade.

The cooling panel works by circulating cold water around the piping in a curved metal structure to cool it. It then circulates air, using an industrial-sized fan, through the gaps in the panel structure, which in turn is cooled. The panel can also have the added benefit of halving O&M costs compared to existing technology used to manage pipeline temperatures.

The trial is part of the government’s TIES Living Lab programme, a collaboration of 25 partners focused on 10 infrastructure, data research and digital demonstration projects, of which the cooling panels are one. The cooling panel project was 70% funded by the UK Department for Transport and Innovation. The convection cooling system was designed by TfL and developed by SRC Infrastructure, who also managed its construction.

Following the trial at Holborn station and subject to funding, TfL will investigate whether the panels could provide a cooling solution for other deep tube lines in the future. Further tests will need to take place at a station open to customers (Knightsbridge) before TfL can look to potentially introduce them at four additional stations on the Piccadilly line (Green Park, Holborn, Leicester Square and Piccadilly Circus). TfL can then identify other places where the panels can provide benefit. The continuation of this trial elsewhere will ultimately depend on the availability of sufficient long-term capital funding from TfL.

The Piccadilly line was chosen for this trial because when new, air-conditioned trains with passing carriages are introduced on the line in 2025, the current fleet will be phased out and peak hour train frequency will increase from 24 to 27 train per hour from mid-2027. This is a train every 135 seconds at peak times and represents a 23% increase in peak service capacity.

Without long-term sustainable investment from the government, only projects already underway or those required to meet safety and other legal requirements will continue – meaning no new investment from TfL in the transport network at all. This would mean that while the new Piccadilly line trains currently on order will be fulfilled, any new order for Bakerloo and Central trains to replace the aging fleet will be delayed by another 10 years until at least 2040 .

In the past, it was a challenge to lower temperatures in deep pipelines, as traditional cooling systems proved prohibitively expensive and difficult to install in the 120-year-old tunnels and stations. In recent tests of a prototype cooling panel in a laboratory environment, a 10-15 degree reduction in air temperature near the panel was achieved. TfL now wants to see if this can be replicated on the disused platform at Holborn, which mimics the live environment in which these panels would operate.

Paul Judge, TfL’s Project Director for the Piccadilly Line Upgrade, said: “This innovative trial is taking place as we experience record high temperatures. This new technology can play an important role in ensuring we do everything we can to protect TfL’s network against future temperature rises, helping to keep staff and customers safe and comfortable.

“The TIES Living Lab project has given us a great collaborative platform to share innovative ideas, data and good practice with a range of providers. The cooling panel project supports the upgrade of the Piccadilly line, which will see the new ultra-modern trains with more space, air conditioning, walk-through carriages and improved accessibility running with greater frequency on the line.

“By looking for innovative platform cooling solutions in the deep tube network, we will be able to support future increases in train frequency on the Piccadilly line with the possibility of the technology being used on other underground lines.”

user - September 3, 2022 0
Electronics
National Ventilation is delighted to announce that it has been shortlisted for the prestigious H&V News Awards 2022. The iconic Golden Hinde project, which...

The DDR5 ecosystem heats up with a Rambus SPD sensor

Scala’s future steps – What to expect from upcoming releases