Newstechok.com
Home IT The 5 best budget gaming laptops of 2022 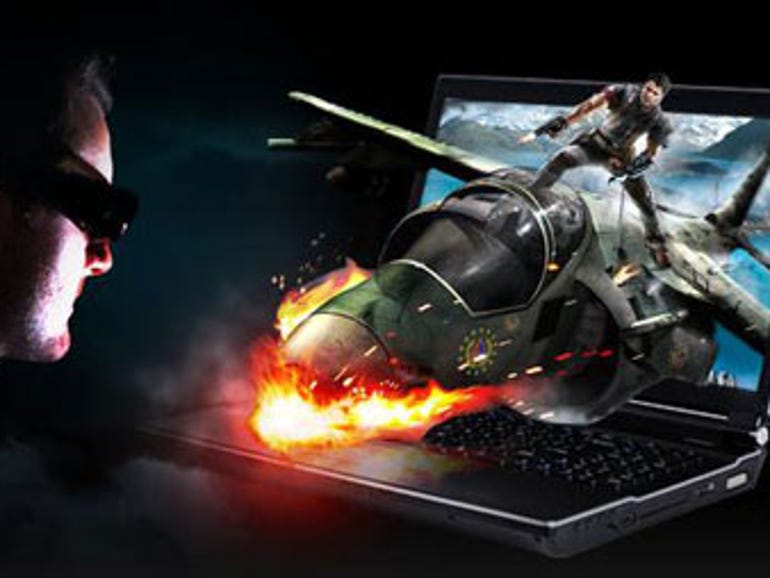 Gaming laptops can cost a pretty penny, but even top brands like HP, Asus, and Dell offer budget-friendly and entry-level models for anyone who wants to game on the go without emptying their wallet.

For this list, I tried to keep my picks for budget gaming laptops under $1,000, but with the chip shortage and stock issues, don’t be surprised if retailers start to bump up price tags a bit. Fortunately, there are some models, like the HP Omen and HP Victus that let you configure your laptop while still coming in under $1,100. I chose both Intel and AMD-based models to help you find the best gaming laptop that suits not only your budget but your playstyle as well.

We chose the Asus ROG Strix G15 as the best budget gaming laptop since Asus is one of the biggest names in gaming laptops, and the ROG Strix G15 proves that you can get a quality machine without having to skip this month’s rent. It runs on an AMD Ryzen 7 5800H CPU and Nvidia GeForce RTX 3050 GPU for tons of graphics processing power. It also supports up to 32GB of RAM, so you can expand memory later if you need to. The 15.6-inch display has a 3ms response time for near real-time reactions to your inputs as well as a native refresh rate of 144Hz for silky smooth action even during intense action sequences. And with Adaptive-Sync technology, the display automatically adjusts its refresh rate to match optimal settings for your favorite games to reduce screen tearing and stuttering. You can use the USB-C port to set up a second display for when you want to multitask or use your laptop for streaming so you can game and monitor the chat or your streaming software without constantly alt-tabbing out. The 8-hour battery gives you plenty of time to rack up Apex Legends wins before needing to recharge. 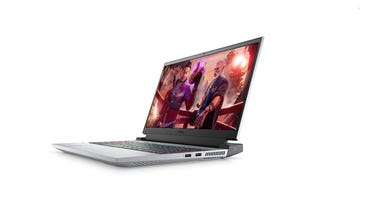 Even though the retail price for this gaming laptop sits comfortably under $1000, it’s still packed to the brim with premium hardware. It’s built around an AMD Ryzen 5 5600H CPU and Nvidia GeForce RTX 3050 graphics card, giving you more than enough power to play the latest triple-A titles. The base configuration comes with just 8GB of RAM and a 256GB SSD, but you can upgrade these yourself later on if you need more memory and storage. The native 120Hz refresh rate gives you buttery smooth action, and the anti-glare coating on the 1080p screen improves viewing angles by cutting down on reflections from overhead lights. Wi-Fi 6 compatibility gives you ultra-fast wireless internet speeds to give you the edge you need to win fast-paced online matches. And the 10 hour battery life lets you either game all night or use the G15 as a workstation during the day. 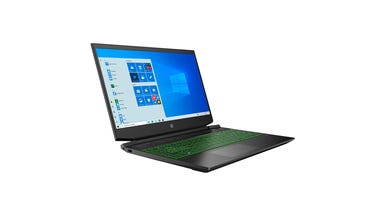 This AMD-based gaming laptop is a picture-perfect example of “budget-friendly,” and if you don’t mind having an older GPU, it’s a worthy investment. The Nvidia GeForce GTX 1650 graphics card may not be the latest and greatest tech, but it still runs just about any triple-A title with ease. The 9-hour battery life is one of the most impressive you’ll find in a gaming laptop, letting you play all day before you need to worry about where the nearest wall outlet is. The only drawback is that if you want to upgrade the laptop later on down the line, it only supports up to 16GB of RAM; which is perfectly fine for most games, but if you want to also use the laptop for things like 3D modeling and rendering, you’ll definitely need more RAM. 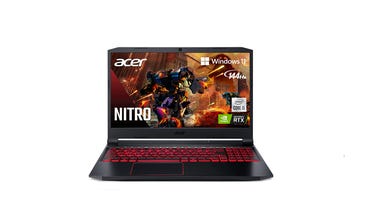 This model from Acer has some welcome upgrades and improvements over previous Nitro 5 iterations. With an 11th gen Intel Core i7 and an Nvidia GeForce RTX 3050 Ti graphics card, you’ll be able to handle all but the most graphically demanding titles. Wi-Fi 6 connectivity gives you faster wireless internet speeds than before, while DTS:X audio creates richer, more immersive audio without the need for a headset. It also features improved heat dissipation than previous models, with twin cooling fans and four vents to draw waste heat away from delicate components and allow your laptop to run at optimal temperatures for longer. And with 8-hour battery life, you can marathon your favorite games well into the night before you need to worry about plugging in. 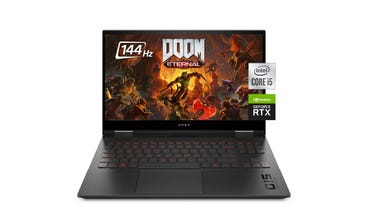 The HP Omen base model is one of the most budget-friendly gaming laptops you can buy right now, and it’s a solid machine if you’re ok with working with an older GTX 1650 GPU. However, you can bump up to an RTX 3050 Ti and still stay under $1050. There are plenty of other affordable upgrades you can choose from like 16GB of RAM and a 1TB SSD, or you can upgrade the laptop yourself at a later date so you can catch components on sale. This laptop features both Wi-Fi 6 and Bluetooth 5.0 connectivity for faster internet speeds and more stable wireless connections to peripherals like headsets and mice so you don’t have to worry about dropping out of team chat in the middle of a match or your mouse disconnecting at an important moment. On a full charge, the battery gives you up to 9 hours of use so you can game well into the evening.

What is the best budget gaming laptop?

Asus ROG Strix G15 is the best budget gaming laptop. This laptop has a price of less than $1000, yet still packs a punch with a powerful processor, awesome graphics and ample battery life.

However, any of the options on this list would make a good gaming laptop, it just depends which features are most important to you.

Which budget gaming laptop is right for you?

Specs are usually overrated when it comes to picking a PC, but not when it comes to gaming systems. Purchasing a cheap gaming laptop is definitely a case where you have to get the most bang for the fewest bucks. It’s a careful balance, though, as doubling your RAM or getting a better graphics card will impact your budget. The closer you get to the $1,000 price point, the more likely you’ll be able to get more than just the basic gaming laptop specs: maybe a newer processor or 16GB of RAM or a 512GB solid-state drive. However, if you’re watching every dollar, you’ll have to make do with those bare minimum specs.

Two other important considerations are weight and battery life, neither of which is a gaming laptop’s specialty. The notebooks on this list fall on either side of the 5-pound mark, but if you’re planning to take the laptop with you on the go often, a lighter system might be of greater importance to you. You also shouldn’t expect miracles when it comes to battery life, as more powerful components being pushed to the max by games will chew through a charge. However, if staying unplugged as long as possible is crucial, serious consideration should be given to the Acer Nitro 5’s superior battery numbers.

How did we choose these budget gaming laptops?

Obviously, price is key when it comes to budget gaming laptops, so we kept the list to models as close to or below $1000. These notebooks are from well-known brands available through major retailers like Amazon, Best Buy and Walmart, as well as their own online stores.

Also critical to making the list was the inclusion of a capable discrete graphics card, as integrated graphics really cannot handle anything beyond casual gaming. Manufacturers clearly market these laptops for gamers, so they often include touches like neon-backlit keyboards and gaming hotkeys.

Are budget gaming laptops worth it?

The word “budget” is sort of subjective when it comes to gaming laptops. But for this list, I tried to keep my picks under $1,000. While they probably won’t blow you away when it comes to things like storage, you can still get a worthwhile machine if you’re willing to compromise on some components. If you’re ok with your laptop having an older GPU or are comfortable upgrading things yourself later on, you can find even better prices than what I’ve managed to scrape up. You can even find certified pre-owned units, but they often aren’t covered by any sort of warranty, so if a component fails, you’re going to have to pay out of pocket to fix or replace it.

Is there such a thing as “too much RAM”?

Yes, actually. For most games, you won’t need more than 16GB of RAM. And while some models support up to 32, 64 or even 128GB, chances are that unless you’re going to also use your laptop for things like video editing or 3D modeling and rendering, you’re just spending money to show off at that point.

What’s the difference between an SSD and an HDD?

SSD stands for “solid state drive,” and HDD stands for “hard disk drive.” An HDD is typically much more affordable since it’s based on older technology that uses a physical disk that is written and read similar to old, blank CD-Rs. They’re also much more prone to damage since they have physical parts that can break down and wear out over time and are more susceptible to shocks and drops. A solid state drive uses flash memory and a specialized chipset to store programs and files. This not only helps prevent damage from normal wear and tear, it makes accessing said programs and files much faster. And if you have an SSD as your boot drive, you can get your computer up and running in seconds. They tend to be more expensive though, especially at higher capacities, so make sure your budget can handle it.

Are there other budget gaming laptops to consider?

Pfizer, BioNTech change the agreement for the supply of Covid-19 vaccines with the EC

High School Interview Questions to Help You Prepare for the Future...

user - June 22, 2022 0
IT
Many universities require students to interview for admission as part of the application process. As annoying as it sounds, this is a great...

A famous AI learned a new trick: How to make chemistry

What is Rowe vs. Wade? In the decision of the...