Newstechok.com
Home IT The 6 best MagSafe battery packs of 2022 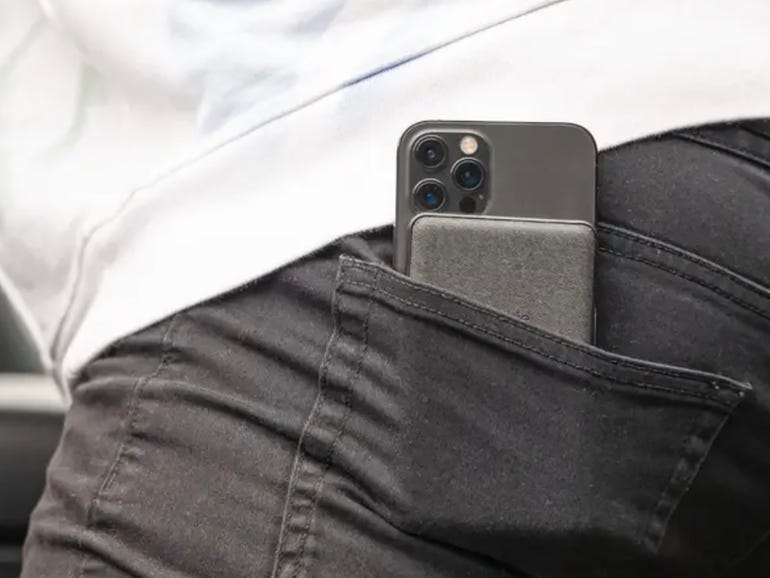 Apple’s MagSafe technology provides a magnetic connection between an accessory, such as a wallet, case or removable battery pack, is here to stay. Apple doubled down with the tech that was first used in the iPhone 12 with the iPhone 13 lineup.

Apple released a MagSafe battery pack for the iPhone 12 earlier this year, and with the iPhone 13’s support for MagSafe, we’re sure to see more accessories and battery packs. Apple’s MagSafe Battery pack boasts all of the smart features we’ve seen in Smart Battery Cases for previous iPhone models, but this time it’s removable. Apple isn’t the only company to make a MagSafe-compatible battery pack that leverages Qi wireless charging to keep your iPhone charged when you’re on the go. Mophie, Anker, myCharge and Hyper are just a few of its competitors. Below you’ll find several MagSafe battery packs, covering a variety of prices and sizes.

The latest company to offer a MagSafe compatible battery pack is myCharge with its MagLock lineup. The MagLock lineup has three different options, ranging in capacity and price. A 3,000mAh option is $50, 6,000mAh is $60 and the 9,000mAh pack is $70.

The MagLock has a unique raised design where the pack connects to the phone. According to myCharge, the gap between the phone and the battery pack allows both devices to remain cooler than the competition, which leads to better efficiency and faster charging rates. When you connect the pack to your phone, it plays a short sound to let you know the pack is in use. Another sound plays when you remove the pack from your iPhone.

There’s a power button, but I have yet to use it. i just attach the pack to my phone, let it charge and then remove it. The MagLock is charged via a USB-C connection, and functions as a wireless charging pad if you place your phone on the pack while it’s plugged in. 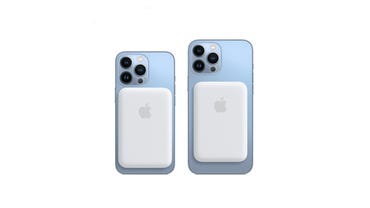 Apple’s MagSafe battery pack is the second smallest battery pack I tested, even though pictures can make it look big. Inside are two battery cells with 11.13 Wh of capacity. Don’t expect the battery pack to charge your iPhone from 0 to 100. Wireless charging is highly inefficient due to several factors (heat being one of them). You’re more likely to get around a 60% charge on the iPhone 12 Pro, and for most, that’s more than good enough to get through a long day at work or when traveling.

At $100, the MagSafe battery pack is the most expensive pack of the lot. Its tight integration can arguably justify Apple tax with iOS 14.7 and above; when you place the pack on a compatible iPhone, you’ll see an animation on your screen letting you know how much of a charge the pack has. It will automatically begin charging your phone. The first time you attach one to your phone, you’ll also see an alert letting you know it will keep your phone at 90% to protect your battery. The battery widget built into iOS will show the pack’s current charge level, right alongside your iPhone and other accessories.

Charging the battery pack is done via a Lightning connector on the bottom of the pack. If you use a 20W adapter, you can charge both the pack and the iPhone at the same time by plugging the connector into your iPhone. Your iPhone will then use reverse wireless charging to top off the battery pack — the first time we’ve seen such a feature in use from any iPhone model. 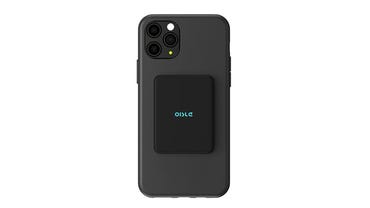 The Oisle Ultra Think MagSafe Power Bank lives up to the first part of its name by being the smallest battery pack I tested. Underneath the logo placed on the front of the pack is a light that makes it easy to see if the battery is on, its charge level and if it’s charging your iPhone. It has a total capacity of 4,225mAh (16.26 Wh), which, in theory, should be enough to charge an iPhone from 0 to 100% without any issues.

On the bottom of the pack is the power button that you need to press in order for the pack to start charging your phone — something I forgot to do multiple times during my testing. You can charge the battery pack at the same time as you’re charging your iPhone, as long as you connect to the USB-C port on the pack with a high-speed charger. There are multiple colors available for you to pick from. 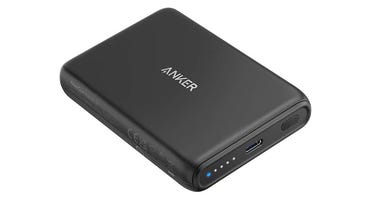 Anker’s PowerCore Magnetic 5K boasts a 5,000mAh (18.5 Wh) capacity in a fairly thick footprint. The Hyper battery pack only outmatches its size. You’ll find LED indicator lights to reveal the charge level, a power button, and a USB-C port on the bottom of the pack.

You can charge the battery pack and your iPhone at the same time using pass-through charging, as I’ve personally tested and verified. One bonus feature Anker’s offering has over the competition is that it acts as an external battery pack in that you can use the USB-C port to connect the pack to another device, like your iPad, and charge it if needed. 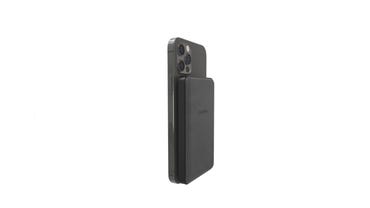 Mophie’s Snap Plus Juice Pack Mini is the only battery pack that has a fabric material on the front housing, breaking up the standard plastic look that the rest of the battery packs have. It’s nearly as thin as Apple’s MagSafe battery pack, but that’s only because it’s rather long. In fact, if you have an iPhone 12 Mini or 13 Mini, this battery pack will stick out from the bottom of your phone by 4.8mm.

With a 5,000mAh (18.5Wh) capacity, you’re going to be able to top your phone off without any issues. What makes this pack so versatile isn’t that you can charge it and your phone at the same time via the USB-C port, but that it includes a magnetic ring in the box that you can attach to other smartphones — iPhone or Android — to add Mophie’s version of MagSafe to any phone. 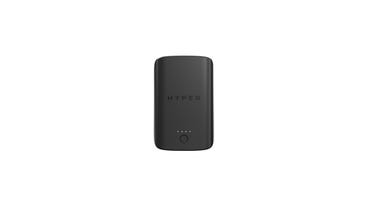 Hyper’s Magnetic Wireless Battery Pack is just $40, but it packs a punch. With a total capacity of 5,000mAh (18Wh), it’s also the biggest pack out of the group, despite most of the packs I reviewed having a similar capacity. On the front of the pack are a power button and indicator lights. I prefer the button placement on the Hyper simply because it’s easier to find and press than on the edge of the pack.

You use a USB-C cable to charge the pack, which supports pass-through charging and can double as an external battery pack to charge via a wired connection. If the size isn’t a factor, the Hyper pack is an affordable option that’s sure to get the job done.

What is the best Magsafe battery pack?

The best Magsafe battery pack is myCharge MagLock Magnetic Powerbank, it was the most capable in terms of battery capacity, options, and price.

Which is the right MagSafe battery pack for you?

There are a few factors worth considering when you look at this group of MagSafe compatible batteries. The first, and arguably most important, is how much you want to spend. If you don’t want to go over $50, then that narrows down your options. From there, you only need to take into account the various brands and the physical size of the battery pack.

My recommendations are if you want to stick with Apple products and use something that the iPhone can take full advantage of, then get Apple’s MagSafe battery pack. However, if you only care about charging your iPhone’s battery while on the go, either the Mophie or the Anker packs are worth looking into.

How did we choose these MagSafe battery packs?

I started by searching for magnetic or MagSafe battery packs built for the iPhone when Apple announced its own battery pack. I received several samples from companies and have spent some time testing all those listed here. All of the packs were tested on either an iPhone 12 Pro or an iPhone 13 Pro Max. I’ve monitored charge levels and tested all advertised features with the exception of charge rate. If a pack advertised pass-through charging, for example, I tested that feature. I also evaluated how big or small the packs are and how much of an impact the size had on the overall usability of the iPhone.

No. According to Apple’s website, its MagSafe Battery Pack is only compatible with the following iPhone models:

My tests have shown the MagSafe battery pack charges a completely drained iPhone 12 from 0 to 60%. The rest of the battery packs I’ve tested go past that, but not by a lot.

Why should you get a MagSafe battery pack?

A removable battery pack makes it easy to charge when you need it and ditch the battery when you don’t. If you find yourself constantly looking for an outlet while carrying a wall adapter and cable, then a battery pack would be a good fit.

Are there alternative iPhone battery packs to consider?

Consider getting your iPhone a power bank!

The Zendure SuperMini 20W is the best power bank for phones, tablets, and more. It has USB-C PD and USB-A ports, it comes in several colors, and its rounded edges make it easy to slip into a pocket.

The shortage is forcing network providers to creatively redesign the product

The results of the Splatoon 3 Splatfest have been announced

Netflix is ​​losing nearly a million subscribers, but profits are growing

The best questions and answers for an interview with Informatica

Twitter’s new features are all about election disinformation

The Heardle Answer Today 4th September – Hints and Clues about...