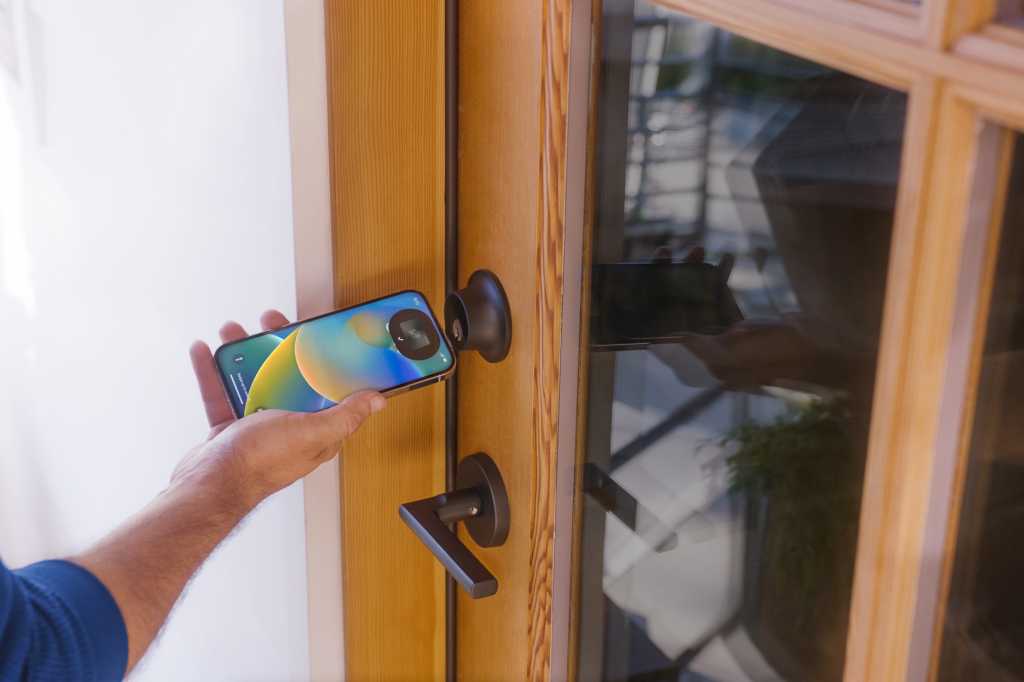 Level has a new version of its high-end smart latch, the Level Lock+. The feature that sets it apart from the earlier Level Lock, Level Lock – Touch Edition and the upgraded Level Bolt – all of which hide their electronics inside the locking mechanism itself – is the support for the Home Key technology that Apple introduced with iOS 15.

Home Key support allows iPhone and Apple Watch users to store a code in their Apple Wallet that will unlock Lock+ when the user’s smartphone or smartwatch is held near the lock. For added security, you can configure Home Key to require your device to also be unlocked with facial recognition or a PIN while it’s near the lock. You can also open the lock with touch using an NFC keycard (two included), with a physical key, or with an optional $79 keypad.

iPhone users don’t have to worry about being locked out of the house if their phone’s battery dies while they’re out. Apple designed the Home Key to remain accessible even if the phone’s battery needs to be recharged.

The Level Lock+ itself is priced the same as the Level Lock Touch Edition – $329 – and is available in matte black (online only) or polished nickel exclusively at Apple Stores at launch. In fact, Apple put the lock on store shelves earlier this week, a few days before the product was officially announced.

Despite its close relationship with Apple – Level’s co-founders are both Apple alumni – all of the company’s smart locks are also compatible with Android smartphones and work in the Amazon Alexa ecosystem.

However, they are not currently compatible with Google Assistant. Why? “Google doesn’t have a local hub platform that we can communicate with,” said Ken Goto, Level’s chief technology officer. “Google uses Weave internally, but it’s not publicly available to third parties.”

During our interview, Goto also told me that adding Home Key support requires a hardware change, so the company won’t be able to add that support to existing Level Locks with a firmware update.

Level’s Locks use Bluetooth and NFC technology to operate, so they depend on a cloud-to-cloud communication bridge if you want to control them remotely or with a smart speaker. In an Apple HomeKit-centric home, that bridge comes in the form of an Apple HomePod mini or an Apple TV 4K. Using Level Lock with Alexa depends on having an Amazon Sidewalk bridge, in the form of a compatible Ring or Alexa device.

Stay tuned for our in-depth review of Level Lock+ in the coming weeks.

Conflictual relations between the home and host countries have a strong negative effect on...

user - September 6, 2022 0
Electronics
Newark now offers DFRobot's LattePanda 3 Delta single-board computer. The board is a pocket-sized hacking computer (125 by 78 by 16mm) that supports...

Reversso raises US$1.1 million to improve returns and exchanges in online...