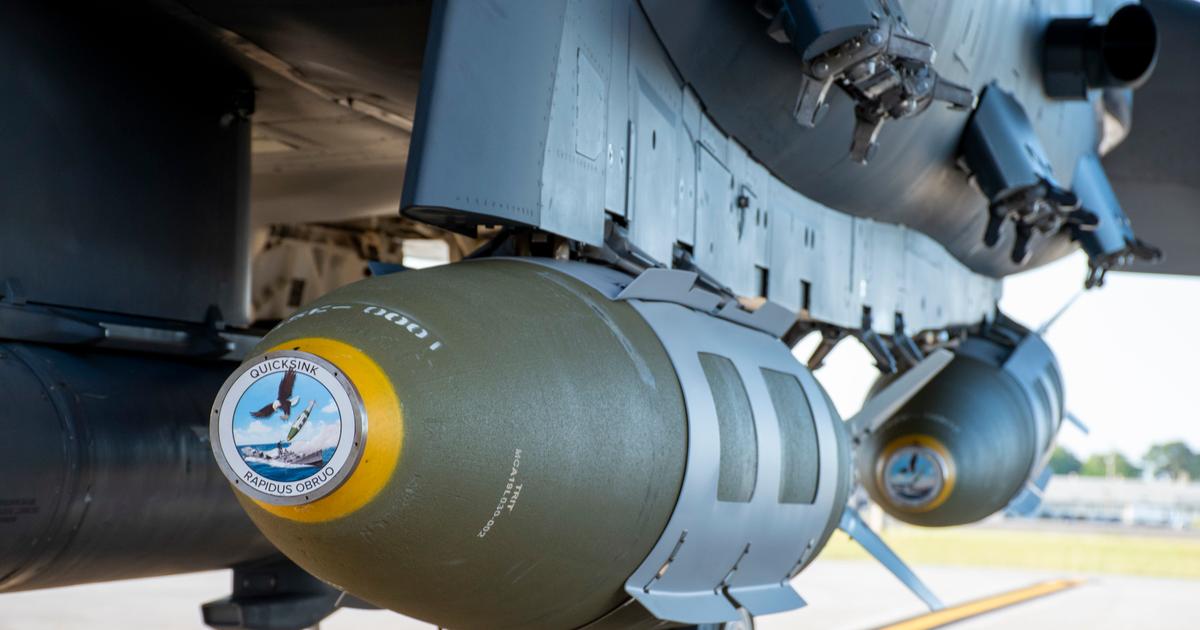 The U.S. Air Force Research Laboratory (AFRL) has demonstrated the ability of aerial bombs to sink ships with the effectiveness of submarine-launched torpedoes at a fraction of the cost. On April 28, an F-15E Strike Eagle sank a full-scale ship in the Gulf of Mexico using a single 2000-lb (907-kg) “Quicksink” GBU-31 Joint Direct Attack Munition (JDAM).

Attacking ships with bombs is not new. In 1921, U.S. Army Brigadier General Billy Mitchell began a revolution in naval warfare when he staged a test attack with a bomber that sank a captured German warship. However, sinking a ship, especially a large one with a double hull and watertight compartments, is not just a matter of dropping explosives on deck, but placing the charge where it can do the most damage with a single shot.

This is why the preferred anti-ship weapon is a heavy torpedo fired from a submarine, such as the American Type 46, which can deliver 96.8 lb (43.9 kg) of high-explosive PBXN-103 to the target. Ideally, the fatal location is a point directly below the keel, albeit at a short distance from the hull. When the torpedo reaches this, a magnetic, timer or remote-controlled detonator triggers the charge and generates a shock wave that shatters the ship’s back, sending it to the bottom.

The downside is that submarines are not always available in the short term, and each tin fish costs a sobering $ 1.2 million per shot. Alternatively, the integrated AFRL test team and Elgin Air Force Base created a demonstration of Quicksink Joint Capability (JCTD) technology to test a potentially more cost-effective and flexible alternative based on the JDAM system.

Simply put, JDAM is a kit that turns an unmanageable “dumb” gravitational bomb into a controlled precision munition. It consists of a collar that goes around the main body of the bomb and a targeting tail that uses GPS and an inertial targeting system.

For Quicksink, the JDAM package has been modified with a new search engine and Weapon Open Systems Architecture (WOSA) to provide the precision needed to sink a target ship for just $ 300,000 per round. In addition, the system would allow more strikes against stationary or moving targets in a much larger area than a submarine could operate in the same period of time.

“The development of this technology is critical to maintaining US technological superiority and addressing specific national security challenges,” said Gary Tayge, executive director of OUSD (R&E) for oversight of the JCTD. “This successful demonstration is an important milestone.”

The video below shows Quicksink in action.

Hisense withdraws a refrigerator with a French door due to the risk of injury...

We need to stop the change in cheerleading

Bitcoin is falling below $ 29,000 as the crypto sale continues

The little escape house puts the focus on the great outdoors

The idea that many people grow after trauma may be a...