Newstechok.com
Home Science The spiral arms of the Milky Way may have carved out Earth’s... 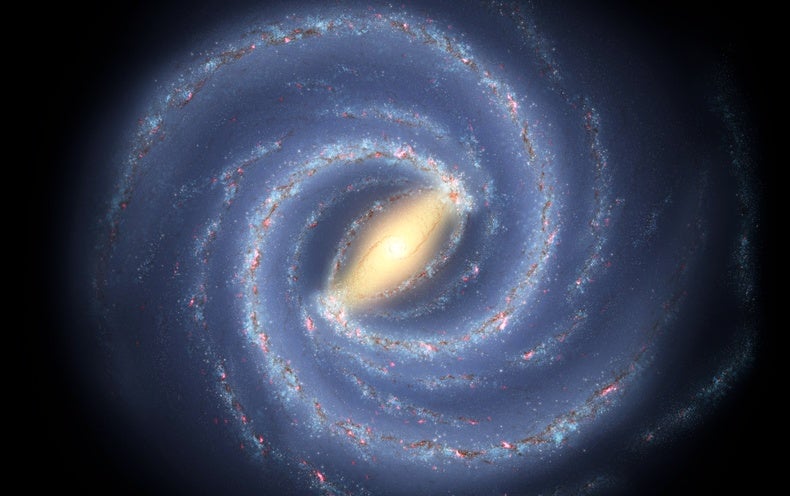 Powerful forces from beyond the solar system billions of years ago may have shaped much of the land beneath our feet today. A study recently published in the journal Geology suggests that Earth’s continental crust went through major growth spurts as the early solar system passed through the four great spiral arms of the Milky Way. Galactic passages caused a shower of comets on Earth and their giant impacts built colossal amounts of new crust.

“It strikes me that the continental crust we’re on—where most of Earth’s biomass is—has a potentially fundamental connection to space,” said Chris Kirkland, a geologist at Curtin University in Australia and lead author of the paper.

Kirkland and his colleagues matched the dates of crustal growth with the timing of galactic motions—both of which occur every 170 million to 200 million years—and tied that timing to comet impacts through traces of crystals and tiny glass beads in the ground. who kept details of the clashes. But the theory proved controversial. He received support from other geologists, but was also criticized for ignoring simpler terrestrial explanations. Astronomers have also found holes in the theory’s celestial arguments.

Although the study spans the scale of the Milky Way, the work began by analyzing tiny crystals just 100 microns across. These crystals have settled in places where Earth’s earliest continental history is preserved: ancient, stable blocks of crust in Greenland and Australia. But they once lived in the vast, seething ocean of magma deep underground before drifting upward—trapped in a molten blob that bubbled to the surface and solidified into a new crust. Despite the harrowing journey, the crystals kept an accurate record of their birth. Encased in them are elements such as uranium, which decay in a clockwork fashion, allowing scientists to use them to track age. Other elements in the crystals mark the composition of the parent magma.

Using these records, Kirkland’s team deduced that during a period spanning roughly 3.8 billion to 2.8 billion years ago, magma breached the surface and built new crust every 170 million to 200 million years. This pattern corresponds to the speed at which the Earth passes through the spiral arms of the galaxy. But why would this galactic scale be imprinted on Earth?

Kirkland and his colleagues argue that as the solar system moves into a spiral arm, the increased stellar density in the arm dislodges comets from the Oort cloud, the vast reservoir of icy bodies that can extend up to about 1.6 light-years beyond the sun. some on an inward trajectory to Earth. The bombarding comets dug up huge volumes from the earth’s surface, creating enormous heat but releasing pressure from below. “The rocky piece on top acts a bit like a champagne cork or a pressure cooker valve,” says Tim Johnson, a geologist at Curtin University and co-author of the paper. When the pressure dropped, the change lowered the melting point of the mantle, causing the rock to form massive amounts of magma. The floating magma then rises to the surface where it hardens into basalt and looks a lot like the dark rocks in Hawaii or Iceland, albeit on a colossal scale. The basalt was so thick (probably tens of kilometers) that the base was blazing hot, forcing it to melt again and form granite, a pale-colored rock so buoyant that it would float on top of everything else.

Evidence for the theory can be found not only in crystals, but also in areas called spheroidal beds. When a comet hits Earth, superheated sediments that have been blasted into the atmosphere coalesce into molten rain, then resolidify on the ground as a layer of tiny glass beads known as spheres. The team notes that two spherical beds that formed about 3.45 billion and 3.25 billion years ago coincided with a time of increased production of crust (derived from crystals) and when the solar system moved into a spiral arm.

“It’s a brilliant insight,” said Brendan Murphy, a geologist at St. Francis Xavier University in Nova Scotia who studies global tectonics and was not involved in the research. “It certainly got me thinking about the early Earth in a way I hadn’t thought about it before.”

Other scientists, however, are skeptical. “To me, there’s not enough evidence to come up with such an extraordinary explanation,” said Ross Mitchell, a geologist at the Chinese Academy of Sciences who was not involved in the study. He worries that only two spherical beds match the crystal data, and one of those beds is not in Australia – meaning the timing may not match after all. Mitchell says this also makes the paper unstable. “It’s like trying to build a house in the Mississippi Delta,” he says. “Maybe it will last a month when people read your paper, but in a year or two that foundation may crumble.”

Mitchell has another objection: Scientists shouldn’t entertain extraordinary ideas until they’ve “ruled out the simple boring ideas,” he says. And for the cycle Kirkland’s team attributes to galactic forces, he has a boring explanation in mind: Regular movements of the plates that make up Earth’s crust. The 170 million to 200 million year cycle is exactly the time it takes for a slab of crust to travel from the surface down to the core-mantle boundary in the well-known process of subduction. Then, as other material moves up as the plates sink, it is likely that plumes of molten mantle rise and create new crust during this same time period. “If we already have explanations ready from Earth’s own cycles, do we really need to go to the outer reaches of the galaxy?” asks Mitchell.

But Kirkland has a comeback. He argued that subduction had not yet begun at this point in Earth’s early history: the planet was simply too hot and the mantle was moving too vigorously for the crust to sink all the way to the core-mantle boundary. And Murphy agrees, noting that the origin of subduction is a controversial topic within geology, and that many researchers argue that it began later. Bombing, on the other hand, was certainly happening in the beginning. “When we look at our celestial neighbors, we know that the early history of the solar system was a shooting range,” he says.

The claim that the shooting range consisted of comets, however, is another controversial aspect of the theory. Comets ejected from the outer parts of the solar system arrive with a lot of energy that would result in a large amount of melting and new crust. But scientists don’t see much evidence of cometary impacts in the inner solar system. Instead, asteroids that carry less energy are the more typical incoming objects. “So if this really happened, it was a process that left almost no geological trace,” said Margaret Landis, a planetary scientist at the University of Colorado Boulder who was not involved in the study.

Bill Bottke, a planetary scientist at the Southwest Research Institute, agrees that comet showers are quite rare. And when they do, comets are highly unlikely to hit Earth. While it is true that comet showers are triggered by passing stars that disturb the inner Oort cloud, such a star must come relatively close to our sun for the showers to occur, and these events are extremely rare—even during spiral sleeve passage. “In science, it pays to be ambitious, but not to be ambitious to the point where you push the data beyond what is reliable,” Landis says.

Johnson says he has received a number of dismissive emails from geologists and is not surprised by the criticism. He also received messages of support. “Things like this are always going to upset some people who prefer the status quo,” he says. “But that’s great—that’s how science moves forward.” Murphy agrees that the paper will encourage others to look at the data in a completely different light and test it further. “It sure makes my head spin,” he says. “I’m sure that’s true for everyone who reads this paper. And whether it turns out to be right or wrong, that’s a big contribution.”

NASA has again postponed the launch of Artemis 1

user - October 28, 2022 0
IT
New Pinterest CEO Bill Ready has a vision for the company: In the future, every product on Pinterest will be shoppable. The user...

This policy could help reduce racial disparities in pollution

How balloons could one day detect earthquakes on Venus