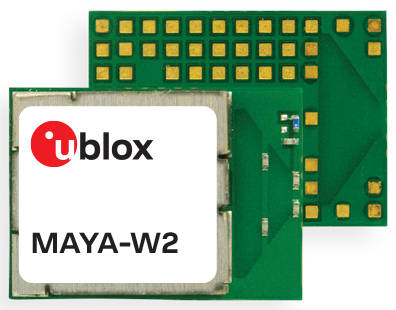 “NXP’s recently announced IW612 is the industry’s first three-radio device to provide secure connectivity for smart home and industrial use and is ideally suited to ecosystems, including the new Matter protocol,” said NXP Marketing Director Tom Eichenberg. “U-Blox is one of the first companies to use this solution for its MAYA-W2 module.”

He sees it being used in solar inverters and charging infrastructure for electric vehicles, as well as in wireless hubs and gateways used in healthcare, smart buildings, smart homes (including Matter) and smart factories. “Other potential uses include professional appliances, asset management and fleet, and retail solutions.”

Samples of the module and assessment kits will be available in June.

Shockingly, the Pixel 7a will probably look a lot like the Pixel 6a

user - August 10, 2022 0
Electronics
Steve Gill, CEO of First hydrogen car.explains more about the company's plans to develop hydrogen-powered vehicles for the light-duty market. Based in Vancouver, Canada, and...